Even though I'm currently living in sunny California and spending more time surfing than curling up on the couch, February is still the perfect month for bingeing on a series...of books!

If you haven't read the New York Times best-selling series The Lunar Chronicles, then hunker down. Based on beloved fairy tales, these books—Cinder, Scarlet, Cress and Winter—will wow you in every way, from awesomely strong female characters to crazy-good storylines to a little love sprinkled in from dudes who offer support.

Already know the series? Be sure to check out the re-releases—they have brand new art that gives a fresh perspective on the heroines and the post-modern, fantasy world they live in.

You may want the winter to end, but you'll wish this book series went on forever. 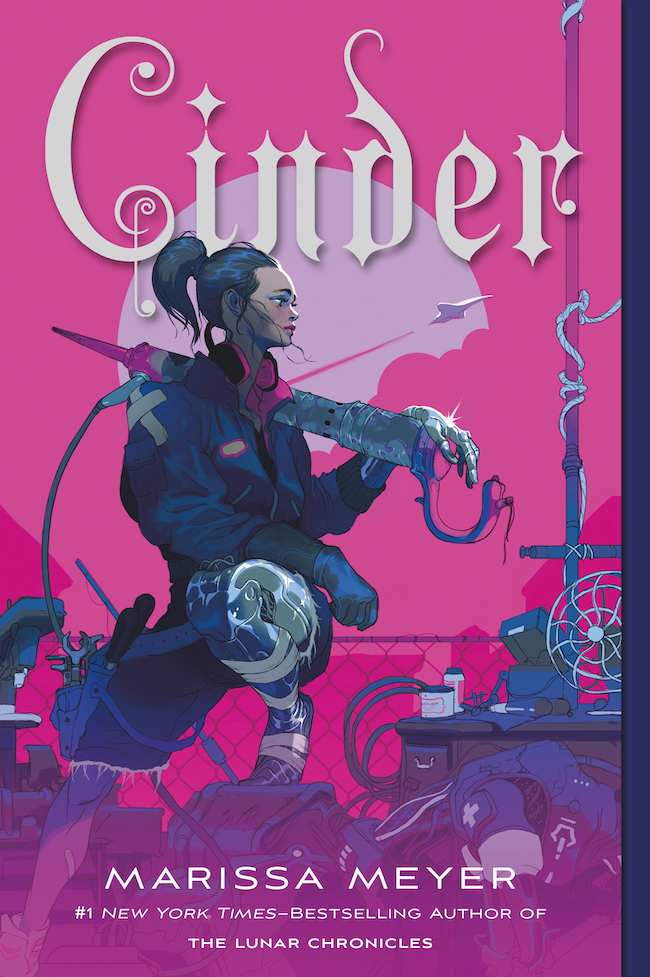 Imagine Cinderella as an awesome cyborg in a sci-fi fantasy novel with a plague and a mechanical foot that is too small. Yep. This book is totally awesome.

Cinder is just about the coolest book I've ever read. As much as I love the fairytale of Cinderella, I think this re-telling of the classic story is filled with some of the most compelling ideas I've heard in a while. Really. I adore anything fantasy, sci-fi or dystopian. This novel, The Lunar Chronicles Book 1, literally delivers it all (with a bit of romance thrown in, too).

Cinder, 16, is a cyborg. She's an outcast. No one wants to be near her, because she's a little bit robot *and* a little bit human. From the start, you can tell her stepmother doesn't like her. Cinder has a mechanical foot that is too small, and she's not supposed to spend money to replace it.

Luckily, though, Cinder is the best mechanic in New Beijing, the futuristic city where she lives. She has her own stall at the city marketplace. Her BFF, besides her favorite stepsister (the one who is not super mean), is a spirited android named Iko. Together, they find a suitable foot, and Cinder can fix anything. Even herself.

One day, her customer is the super cute Prince Kai. He needs his oldest android repaired. Even though Cinder and Prince Kai hit it off, the two of them would be a totally unacceptable couple. After all, he's a prince, and she's a cyborg. It's a connection with so much spark, you won't be able to stop turning the pages.

And if the budding romance doesn't keep you obsessively reading this book, the incredible storyline will have you staying up way past your bedtime. That's exactly what this book did to me!

The vivid, complicated world author Marissa Meyer builds in all four of The Lunar Chronicles books is fascinating. There's a deadly sickness going around the city called letumosis—with no cure. Cinder's mean stepsister gets infected, and her stepmom blames Cinder. So, the stepmom offers Cinder as a sacrifice. Meanwhile, the Lunar Queen is about to storm the earth to take it over. Cinder's world gets ripped apart as she may be the only girl who can save it. Just wait until Cinder finds out her secrets!

You'll never find a Little Red Riding Hood retelling like Scarlet. The namesake is another tough, whip-smart teen who will steal your heart—and make you bite your nails—in this sequel to Cinder.

Scarlet is feisty. If you've ever wanted to smash something—I know I have—you'll understand her. As the book begins, Scarlet takes some big, juicy tomatoes and throws them against the stone wall of a tavern. Juice flies everywhere, and the tavern owner tells her that she better not be destroying his tomatoes.

She has plenty of good reasons to be angry, frustrated and downright mad. Her grandmother has been missing for two weeks. The police dismiss the case, saying her grandmother left of her own free will or maybe she committed suicide. Scarlet knows that just cannot be true.

Meanwhile, he is back. Wolf, the street fighting drifter has shown up again. Can he help Scarlet? Can she trust him? Part man, part wolf, this second novel has more violence and neck-biting than the first one. But I bet you'll love how it all unfolds.

As you learn about Scarlet's story and crush, the book also keeps up with Cinder and Kai's storyline. After an explosive Book 1 ending, the mind-reading Lunar Queen is furious and looking for the escaped Cinder. Prince Kai is now Emperor Kai. And they all better find Cinder—or things are going to get ugly. Both plots blend together brilliantly to create even more good drama and tension that you'll love. 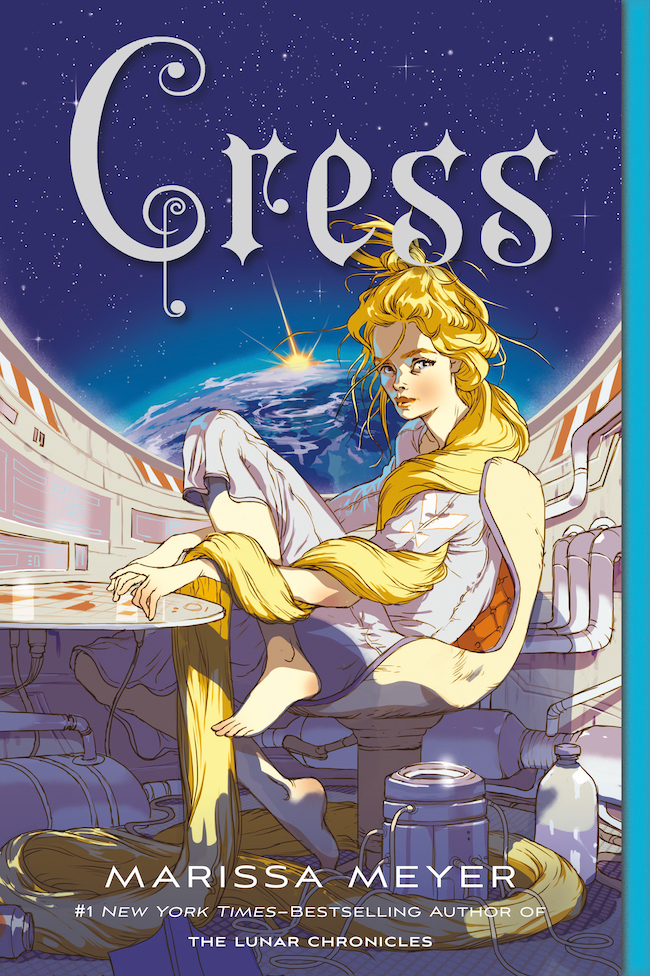 Cress is based on Rapunzel. And anyone who has ever felt isolated or wronged will understand how this teen feels—well, minus the earth-orbiting satellite prison she's been held in for seven years. At least she's had a lot of time to find-tune her hacking and coding skills!

When I was a kid, Rapunzel was one of my favorite fairytales, so I couldn't wait to read The Lunar Chronicles' spin on the long-haired, lonely girl. Let me just say that it didn't disappoint—and the prolific author busts out more creativity than I ever could've imagined. Really, you'll be impressed by how all the stories weave together.

Every 16 hours, Cress' small personal satellite prison orbits the earth. She appreciates her beautiful view at first, but it's quickly clear that she's living a nightmare. Queen Levana locked her up seven years ago, and Cress always avoids looking at the moon called Luna and tries not to peer into its cities. She has a fear that the Lunars might be able to gaze up and see her.

As the book opens, Cress is sitting in her pod with her super-long braids (after all, she hasn't been able to cut her hair for all those years). She has, however, become a coding and hacking expert. She watched Kai and Cinder and many others. She knows the details of their lives and their plights. Even though she works for Queen Levana, her heart and sympathies are with Cinder, the rebel.

She checks her newsfeed, and she reads, "14 cities attacked worldwide, two-hour murder spree results in 16 Earthen deaths, largest massacre in third era." Her biggest problem: This is all her fault. Read on as this incredible story unfolds, linking with Cinder, Wolf and Scarlet's plotlines.

Also, Cress has developed a virtual crush on Thorne—and now she just may meet him when the rebels attempt a rescue. Meanwhile, they must stop Queen Levana from marrying Emperor Kai (he agreed to matrimony in order to stop the attacks). OMG, when this book ends, run, don't walk to get to book 4. 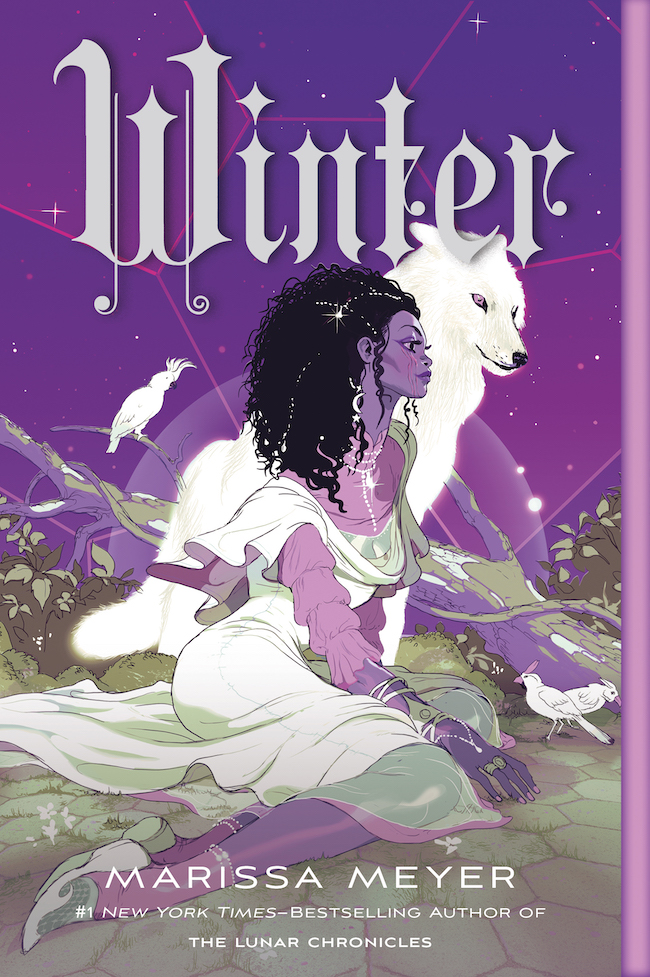 Snow White reimagined as the Princess and stepdaughter of the mean Queen Levana? Yes, please. This is the book I waited and waited for when the series first came out. Will the awesome rebel girls Cinder, Scarlet, Cress and Winter be able to fight, win and come out of it alive along with their true loves? Read the last installment to find out. It big-time delivers.

Princess Winter is extremely beautiful and kind. Even prettier (and way nicer) than her stepmother Queen Levana, whom Winter hates. But Winter has Lunar sickness. She refuses to use her gifts and powers because she doesn't want to be fake (ahem, like the queen). For this (and many other reasons), she is widely loved and admired by the people. You-know-who (the queen again) gets very jealous.

Winter joins forces with Cinder, Scarlet and Cress to overthrow the queen, who now rules the moon and Earth. Because Winter won't use her Lunar powers, she suffers from hallucinations and seems fragile. But don't be fooled, she still kicks some serious butt when she joins with her friends.

Filled with action (warning: some of it pretty gory), loss and love, this is exactly the book I was waiting for. It may be 800 pages long, but you will hang on every word, just as I did.

We've learned so much about the characters and their crushes at this point in the series. Now we get to see them do so many amazing things. I don't want to say too much more here because it's easy to spoil the entire ending, but I'll leave it at this: You will be on the edge of your seat as the group goes through loss and love and plans their next moves. Will they win in the end? I won't say. But this book is engrossing and satisfying in every single way. 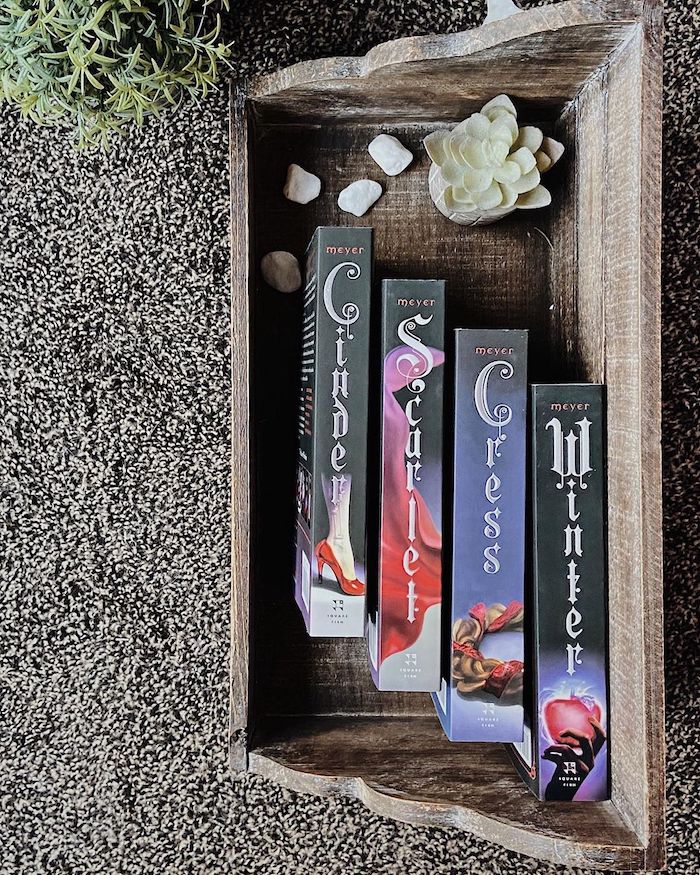 Want to join Chloe's Book Club and get all the updates, announcements, giveaways and more? Sign up for the newsletter here!