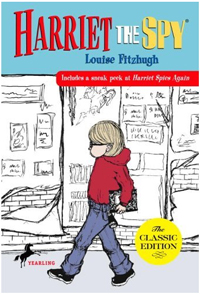 The story of a girl who writes it like it is (only to get in LOTS of trouble), Harriet the Spy, by Louise Fitzhugh, has captured the imagination of readers since it’s release in 1964.

This book was one of my favorites, and rereading it was a trip down memory lane for me. Can’t wait to see what you all think of the book, too! Let’s discuss…

Do you think Harriet is a nice person?

I do, but I think she has difficulty relating to people. She definitely says some outlandish things about other people, but if we’re all honest, I think everyone thinks unkind thoughts sometimes. It’s not like Harriet ever meant for everyone to find out that stuff!

If your friend wrote mean things about you, would you forgive her?

Um, that would be difficult. But ultimately, if we’re really good friends, shouldn’t we be able to work it out?

What do you think about Harriet’s parents?

Harriet’s parents make me sad. For a while, at least she had Ole Golly. They seem so not into Harriet’s life, but by the end of the book, they seem so much more involved. My parents were so not like that, but I definitely have some friends whose parents were so, so busy.

Have you ever spied on someone? This includes reading someone’s e-mail, listening over the phone, crouching in the next room. Anything!

Who hasn’t! When I was little, my cousins and I totally played Spying Game, where we would try and hide under the grown-up table and listen in on their conversation. But really, they knew we were there because we were probably sitting on their feet. But seriously, I have maybe a couple times looked at a letter or e-mail that someone left open. Not with malicious intent or anything! It just happens. People should really be more careful! LOL!

Did you catch Harriet the Spy the movie?

I have not, but I so want to! It has Michelle Trachtenberg (you know, from Ice Princess and Gossip Girl and Buffy), and Gregory Smith from Everwood (he was Ephram! Eeeee!). They were much younger, of course. I heard good things about it, but I want to know what you thought!


And, tune in next week! We’re posting the book club schedule for the rest of the year! Can you believe how fast 2008 is whizzing by? We have a lot of pages to read by then!