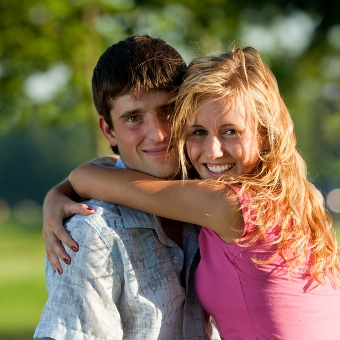 Let’s give three cheers for our guy friends. Without them, with whom would we play COD for hours on end, share gross jokes (that we secretly love), watch X-Men, or debate the merits of the Cowboys vs. the Steelers? With guys, what you see is what you get. But while boys may not be complicated, sometimes a guy friend/gal pal relationship can be when feelings shift in a romantic direction. If you have feelings for him, it can be difficult to tell if he feels the same way (and thus scary to let your true feelings be known). If you know he like-likes you but don’t feel the same way back, it can be awkward territory (and who wants to be responsible for breaking their friend’s heart?). If you both like each other, though, it can be the solid foundation to starting a great relationship, though you still might worry about losing the friendship if things don’t work out. Ummm, yikes! So GL decided to do a little sleuthin’ for ya to get some answers straight from the source: the fellas.
Yeah, it can get weird.

So us chicas know that once our feelings turn lovey-dovey in friendship, it seems like there are one of two ways it can play out: awkward or amazing. And yes, when the crush is only coming from one end, figuring out how to act around the other person can be uncomfortable. But here’s the (kind-of) good news – the boys have been there, too.

As Chris tells us, “This is always a rough situation. I have been one both sides of the 'friend zone' and neither is really ideal. Both sides experience an awkward and frustrating uneasiness around the other person, and it didn't really go well until, in both cases, someone flatly stated how they felt.”

Zach has been there, too: “I've been in that situation a couple of times, once ending terribly, once ending well. The first time, my best friend and I seriously dated for over a year, and just now are picking up the pieces of the wreckage left behind in our relationship lives. She's happy with someone else—I'm single, but much happier than I was with her. I was also serious with another best friend, but we ended up staying very close even as she broke up [with me] for someone else.”

There is some other really good news from all this: even if the feelings do come out and they aren’t matched, it def does not mean the friendship is over. As Michael puts it, “I would say the lesson I’ve learned is that it never hurts to be honest. If you don’t stay friends after opening up to them then you likely weren't that good [of] friends in the first place.”

Simple advice: Be straight up.

So, how would a guy friend want you to let him know you have feelings for him? The guys already hinted above: don’t make it complicated, just be straightforward and honest. Tell him how you feel– preferably in a face-to-face convo, when the two of you are alone.


Houston has some solid advice: “I would want her to be direct with me. There is nothing worse than just letting it go without bringing attention to it. Don't be shy. You will never know whether a guy likes you back unless you go for it. That being said, don't get your hopes up that a guy will like you back. You won't know how he feels until he or you makes a move.” And he knows what he’s talking about: his current gf is a former just-friend!


Adrien agrees, and has some tips for how to go about it: “Be within touching distance of the guy when you tell him so he can hold your hand or hug you or whatever if he likes you back.” Awww!

How do you know?

So it seems simply stating how you feel is the way to go, but you probably want to have some sense of how he’s feeling before you leap, right? And how do you even begin to tell if your fella friend likes you as more than a not-annoying almost-sister or video-game partner? The guys clued us in.

Houston says, “I think the biggest sign is a guy asking you to hang out alone just the two of you. Constant flirting is also a big sign, but don't take a guy being nice and talking to you as being flirty. There are clear differences.”

Alright, but what exactly is the difference between flirting and just being friendly? Here are some hints from Adrien: “If a guy who normally doesn't touch people much is touching you…that's a good sign. I think no matter who the guy is, if he compliments you a lot without any prompting, that's a good sign. If he gives or makes you a gift and it’s not for a holiday or your birthday, that might also be a sign.” Specifics – we like that!

And finally, you know how you start to get super-nervous and analyze every move you make around your friend-turned-crush? Turns out, you’re not alone. Sam dishes, “Guys actually watch what they say and do around girls when they like them. They just don’t want to do anything wrong!”

So, can guys and girls really be “just friends”?

In the classic chick flick When Harry Met Sally…, Harry tells Sally that men and women can never be friends. And, well… he turns out to be right. At least as far as the movie goes. In true Hollywood fashion, the two leads are sent through a dramatic run from not friends to friends to not friends again, ‘till they finally realize in the end that they’re in love. But what about real life – can guys and gals ever really be “just friends”?

We asked our boy interviewees, and their answer was an enthusiastic, unanimous “Absolutely!” In fact, they couldn’t stop gushing about you:

“Some of my best memories are with my friends that just so happen to be girls! Mostly as you grow up, you figure out that girls can be as great of friends as guys can be, that’s what happened with me.” – Sam

“There are a lot of girls who I’ve grown close to who I love like a sister, not as a girlfriend.” – Michael

So, if you seek nothing more than a boy bud to just hang with, don’t worry: the guys are right there with ya.
Love this post? You'll heart these, too!

» Lookin’ for summer love? Get a boyfriend right now

» Crush confessions: your most embarrassing moments ever

» Are you lucky in love? Take the quiz!