Why are guys so nuts about football? 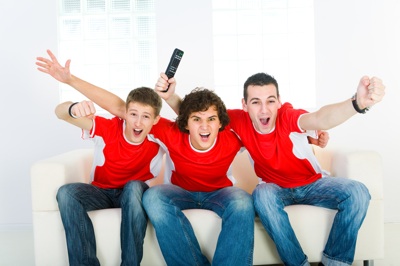 It seems that all boys go into auto mode during football season (especially when its Super Bowl time). Bragging about their favorite team, prepping for game day and don’t even think about disturbing them when the game is actually on. But why do boys love football so much? What is so thrilling about a group of fat men in tight pants throwing a ball around and tackling each other? And all that effort just to get the ball over a line seems a bit silly.
Think of it this way: Football for guys is what shopping is for girls. It is a time when they can get together and bond over something they have in common. Although they get a bit more rowdy over a touch down than we do about a major sale at the mall, it is their way of celebrating and who are we to stand in their way.
Wearing their fave team's jersey and chanting the fight song may seem over the top, but it is how they choose to spend their “guy time.” So, next time the big game is on don’t pester him about watching something useless, and let him spend the day with his guys. Take it as a free pass to hit the mall with your BFFs for your bonding day.
Does your guy love catching his fave team on Sundays? Share in the comments below.