What he and his friends say when you aren't around 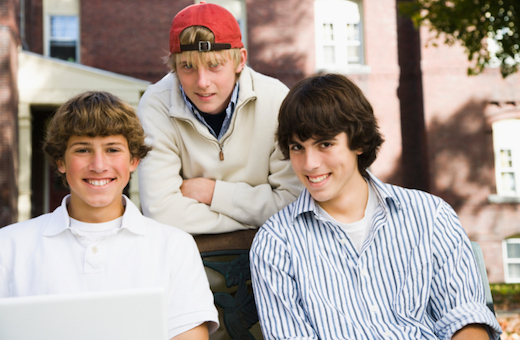 It’s easy for your BF to look like total royalty when he’s right there in your face. He’s holding your hand, opening doors, buying you flowers—he’s practically Prince Charming when you’re together. But, does the crown come off when you’re not around? In other words, how does he act behind your back, and what really goes on in those all-guys group messages? Real boys weigh in a give us girls a sneak peek at how BFs really play when their girls are away.

Do guys in a relationship discuss other girls (like “omg Amber looked hot today”) other than their girlfriends when they’re talking with friends?

“Sorry ladies, but yes it’s true. Everyone talks about girls who aren’t their girlfriends.” -Corbin C., 16

“Yes, guys in relationships discuss other girls. Just because a guy is involved in a relationship, does not change him from being a guy. Even the best BFs talk and think about other girls. The difference between a good BF and a bad BF is finding the strength to not act on those thoughts.” -Calvin B., 17

“In most cases no! Most of the time it just leads to either your girl having trust issues or just taking a stab at her self esteem. If you say something positive about a girl who is not your girl, then your GF will she's like ‘Well why are you with me?’” -Marcell B., 15

“Yes, guys do talk about other girls while in relationships. I don't think they really mean anything when they say it.” -Kyle G., 15

“Yes, us guys do discuss other girls. Sometimes we compare them to our girlfriends. Nothing bad at all—just like girls gossip, boys gossip as well.” -Eric B., 16

“If the guy is truly in love with his girlfriend, all other girls completely disappear and can’t compare to his chick! He won’t want anything other then friendships from other girls. He won’t really talk about other girls, he just brags about his own.” -Danny P., 15

If so is it just “guy talk” or does it mean he’s thinking about cheating?

“It’s just guy talk. It’s nothing to take serious. After we say it we probably never even think about it again—that’s how not serious it is.” -Corbin C., 16

“It’s only guy talk. I’m sure Amber wasn’t the only girl who looked hot that day. Totally innocent!” -Calvin B., 17

“Those instincts are natural for us. As a guy, I wouldn't want to be trapped in a relationship to where I couldn't be honest and say what's on your mind to my friends. And just because it’s being said to friends, does not mean a guy is trying to cheat.” -Marcell B., 15

“I don't think they want to cheat on their girlfriends if they talk about another girls. It's just "guytalk". I see it as a compliment as long as it's not going too far.” -Kyle G., 16

“It's just guy talk. There are never any real thoughts of cheating. It’s all laughs.” -Eric B.,

Do guys vent to their friends about girlfriend problems, and if so, what types of things are off the table for discussion?

“Yes, I vent to my friends about my girlfriend and trust me, we talk about EVERYTHING.” -Corbin C., 16

“Almost never! Venting to a friend about my GF is weird. When a guy is facing girlfriend problems, he shuts down emotionally which means we don’t wanna talk about the problem at all! We’d rather live today and think about it tomorrow .” -Calvin B., 17

“Of course we vent to our friends about our girlfriends. We vent to our friends because sometimes we just need another guys take on the situation. My bud be dealing with the same thing with is his girl or he could have already dealt with a problem that I currently dealing with. Everybody vents to their friends about issues. As far as what is off the table: anything I know she wouldn't put out there, I wouldn't. If you didn't hear it from her, than you’re not going to hear it from me.” -Marcell B., 15

“We exchange info on the good to get help on fixing the situation. The things that are left off the table is secrets and stuff that we as a couple have decided to keep private. Best believe something's are better left unsaid.” Eric B., 16

“We talk about everything with our friends. When you trust the friend you’re talking to, nothing’s off the table.” -Juwan D., 17

If you’re experiencing problems with your girlfriend, do you find that your guy friends are more likely to encourage you to work things out, or to breakup/cheat?

“My friends don’t encourage to cheat, but if I’m sad about problems I’m having with my girl, my friends will try to lift spirits up.” -Corbin C., 16

“I think if your friends were really your friends then they would encourage you to do what's best for your relationship. If they just told you to forget about her, or go cheat, then it's obvious they don't have you best interest at heart and questionable if they are even your friend. For the most part, I think your friend wouldn't tell you anything to jeopardize what's makes you happy—well at least my friends don’t.” -Marcell B., 15

“They’ll always encourage me to do whatever is best for me, so it all depends. My ex girlfriend had pretty big problems, and so when I asked for advice they told me to dump her because they thought I deserved better. But my current GF is basically perfect, so when I complain about her sometimes my friends are like ‘It’ll be fine, she’s awesome. You guys will be good.’” Duane K., 14

“Guy friends are more likely to tell you to cheat on your GF rather than just telling you to work things out with her.” -Kyle G., 16

“One of my friends encourages me to try to fix it unless they just don’t like the girl. But mostguys encourage their friends to cheat because we like to do things together. For example, if I’m going on a date with Amber, I want my friend to cheat on his girlfriend with Amber’s best friend so we can double date! Juwan D., 17

Have you ever seen a guy in a relationship deny his GF or claim to be single when she's not around?

“I’ve never straight up said ‘I’m single’ when I’m not, but I’ve acted like I was single in public before. Like flirted with someone else at a party. I guess my way of thinking was, ‘if she doesn’t ask I’m not gonna tell her I have a GF…so it’s not really lying.’” -Calvin B., 17

“No, I personally have never witnessed anyone of my friends deny their girlfriends. I couldn't imagine anyone being that ashamed of their girlfriend to the point to where you don't even claim her. That's so immature.” -Marcell B., 15

“Yes I seen a plenty of guys disclaim their girlfriends. they tend to do it when they are mad at their GF or when other girls are around.” - Kyle G., 16