Are you eying your bud's ex? Here's how to deal... 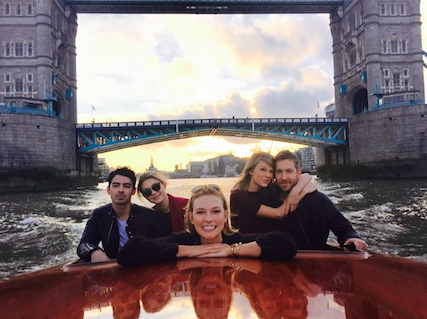 Over the weekend, Taylor Swift shared the most adorable Instagram of the double date she went on with her boyfriend Calvin Harris, BFF Gigi Hadid and Gigi’s new man (plus bonus Karlie Kloss, natch). The date looked super cute and fun, but we can’t help but notice that Gigi’s new man is Taylor’s old man, Joe Jonas (remember how he supposedly dumped her over the phone a couple years back?).

Usually this would call for a yikes, but the group actually seemed to be rocking it, despite any potential ex awkwardness. To add even more mayhem to the mix, Taylor is actually dating her friend’s ex—Calvin’s former flame (and Tay’s bud Ellie Goulding) was even the one that set them up.

So all this got us thinking—is it ever really okay to date a friend’s ex? How can we get our girl’s approval? And how can we learn to be cool with it if a friend wants to date one of our exes? Let’s discuss.

If you want to date your friend’s ex…

So you’re interested in your friend’s ex. First things first, take a step back and honestly assess the situation. Ask yourself this question: How into him are you? If all you did was take notice of his bright smile or cool band tee, it might not be worth the potential drama. But if you’re totally smitten? Give a thought to how they ended things. If it’s been a while and they ended things amicably, you just might be in luck. If they had a super dramatic breakup, or if they dated really recently and she hasn’t dated anyone since, now’s probably not the time for you to snatch him up. And if your bud still misses him, no matter how long it’s been? Sorry, sister, but there may never be an okay time to make your move.

The major thing, though, in any friend/ex situation, is that honesty is key. If you decide to explore your feelings, don’t hide them from your friend, but above all, don’t break girl code—ask her if she’s okay with it before you actually make a move. If she says no, no matter what, your job as a friend is to try your best to move on. And keep in mind that even if your BFF says she’s cool with it, she may be less cool when she starts to see you two together. Don’t keep your new boo a secret, but leave the gushing and PDA to a minimum.

If your friend wants to date your ex…

This one is all about knowing yourself. If a friend asks if she can date your ex, don’t just say yes to be nice, but don’t say no on principle, either. Consider where you are with your perspective on the guy and your former relationship. Think about how you’d feel if you saw him and your bestie smooching. Little resentments and jealousies can turn big later, so consider it carefully before you answer. That said, if he’s a great guy and you’re truly over him, there’s no reason not to let your pal give it a shot.

Once you say yes, you can’t un-say yes, but you can share with your friend if you start to feel jealous and ask that the three of you don’t all hang out at once. That’s totally fair—just make sure you and your bestie keep it open and honest about where you’re at (and if you’re feeling uncomfortable) even after they get together.

How to be Tay-level comfortable around an ex…

Taylor may be the biggest pop star in the world, but we’re betting that even she wasn’t immune to the awkwardness and overthinking that comes with seeing an old boyfriend again. In this sitch, she was probably tempted to show off her love for Calvin or just stick to talking to Karlie and Gigi. But the more normal you can act, the more comfortable you’ll feel. It’s just like how they say that smiling makes you happier—act normal and it will feel more normal.

If you know you can’t handle a situation going in, don’t go into it. Taylor has years of perspective and several Grammys post-Joe to soothe whatever hurt feelings there were, but if you’re still moping instead of moving on, it’s okay to take time for yourself. Once you’re ready to let those feelings go, there’s no reason why you can’t go back to talking to him like a friend, just like you probably were before you got involved.

Have you ever crushed on a friend’s ex or had a friend date yours? How did you deal? Did you find these tips helpful? Share in the comments!