Your guide to letting that dude down easy 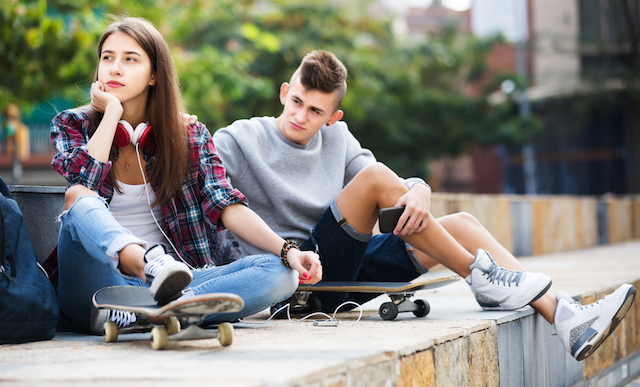 Just like us girls, it's totally normal for a guy to have a crush. Sometimes that crush may even be on you. Yes, you! However, it's okay if the feelings aren't mutual. (Don't think you have to like someone simply because they like you.) Perhaps he's not outgoing enough, he's your BGF or you've never met him IRL. Either way, before you start reciting lyrics from Meghan Trainor's "No," consider these tips for *politely* rejecting guys.

The Shy Guy
So this guy who you never really talked to just asked you out. Maybe you've made eye contact with him from across the mall food court or you've seen him around the park, but you don't really know him. His interest may seem out of the blue to you, but it's likely that he's just a super shy guy and has had his eye on you for a while. Now that he's asked you out (which no doubt took a lot of courage), instead of agreeing to go out with him to be nice or harshly saying, "No," why don't you invite him to join your friends on your next beach trip instead? This way you won't totally crush his confidence and you can get to know someone new.

The Digital Dude
You know that guy from your brother's friend's BBQ who you gave your number to and hasn't stopped texting you since? Yeah, this is him. There's nothing wrong with friendly conversation, but if you notice things start to get a little flirty and you're not interested, try directing the conversation to another topic that's a little less interesting. Perhaps your new barista job or that cute thing your puppy did yesterday. You could even turn your convos into a group chat with some of your other friends. This should give him a clue that you're not interested in any one-on-one happenings. However, if he continues, it's best to confront him face to face. Be direct and honest. If he still doesn't stop, block his number and tell a trusted adult who can help you.

The Friend
You've known this guy for a long time and you've shared a lot of fun memories together. However, instead of going to the pizza party your crew has planned on this weekend, he asks you out to a nice restaurant. To avoid hurting his feelings, remind him of how much fun you have when you hang as a group. When explaining this to him, stick to "I" comments. For example, "I appreciate everything we have as friends. I don't want that bond to go away." This way he doesn't feel as though he's personally a problem and your friendship will remain golden.

Number one rule: don't give your crush any false hope. If you are serious about not liking them back, leading them on will only create a mess. Imagine if a crush did that to you—how would you feel? No matter the sitch, respect his feelings.

Do you have another way to politely say no? Share in the comments!