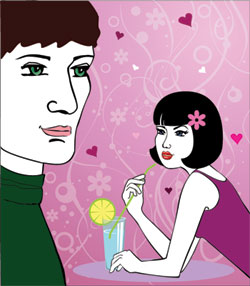 I'm in desperate need of advice right now. O.K., here's my problem, I've had a crush on this boy (I'll call him Cam) for about a year and a half. He's really nice and cute and the best thing I liked about him is that he isn't obsessed about being popular or cool like most of the other boys are. Cam is in my circle of friends, and he sits with us at lunch and hangs out with us almost every day. He's one of my best guy friends. But on the bus today (he rides my bus), this popular girl said "You're not even popular, Cam" and he said "You know what? I'm going to sit with you guys at lunch tomorrow. I'm sick of sitting with these...people" and I could tell he was going to say something else but wouldn't since I was right there.
I feel betrayed and hurt. Cam is acting like a hypocrite. Usually he avoids the popular crowd whenever he can because he hates how they act so arrogant all the time, but now he'll probably become one of them. I feel like I'm losing him, and it's even worse because I have a crush on him. I don't even know why he would do this. I know for a fact Cam likes hanging out with me and the rest of the people at our table. Sometimes kids make fun of him for sitting with us because the majority of our crowd is girls, so maybe that's why? I need help. What do I do now? Give him the silent treatment? Talk to him? Fight with him? I don't want him to think I'm controlling his life, but it's just that he's never acted like this before. Should I get over him? If so, HOW? I've fallen pretty hard for this guy. Please help soon!

I know this is a tough sitch. It always is when you're on the outside looking in...but what you probably realize is that being on the outside is better. Cam maybe does too, but you're going to have to explain your feelings to him. The good news is that he realizes how arrogant that crowd is. Give him examples of how he is acting just the same, but in a nice way. You don't want to hurt him as he hurt you. You should give that as one of the examples by the way. If he is a true friend (and hopefully maybe more) he will take note of the fact that he has hurt someone who he cares about. Some people jump, no matter how high, at the opportunity to be popular. I hope that Cam realizes through your talk with him and examples that he should stay true to himself. If things don't work out, I wouldn't start a fight with him, that will only make it worse. And, if he does decide that being in the "In Crowd" isn't for him, it will make things uncomfortable between you two, when he realizes that hanging with his real friends is where he belongs.

I have a problem that I need some advice for. There is this guy (wow I bet u never hear girls needing advice about guys lol), I'll call him Derek, who I really like. There are 2 problems with my situation. 1 is that he is really popular and a lot of people like him. The other problem is that there is this other guy, I'll call him Sam, who likes me. The only problem is, I don't even know him!!! He's never even talked to me! So, Derek was like "I know someone who likes you!" And at first I thought he was kidding because he and his friends always tease my friend about people liking her. But then I was like "Well, if you know someone who likes me, then who is it?" And he said someone who I didn't even know and he's like "He's really nice!" So I know Derek doesn't like me cause it seems like he wants me to go out with Sam. But, I don't want to go out with Sam because I don't even know him! So, can someone help me with Derek and how I can show him I like him? And im sort of shy so there is no way I will tell him I like him and I don't want a friend to tell him either. Thanks!!! (Wow I didn't know I could type so much lol!)

Hey Victoria,Holy cannoli that’s a mouthful! We get questions about guys all the time…they are like the Great Sphinx or Stonehenge (completely mysteriously and confusing). Sounds like you’re in a little bit of a pickle. First of all, popular or unpopular, all that matters is that this guy will treat you fabulously, so don’t even consider that an issue. If you are worried about your own social standing, anyone who writes you off because you aren’t “cool enough” is a dummy and not worth your time. Seriously! It’s always hard getting to know people, especially when you’re shy. I myself am a bit of a wallflower and what helped me was small get togethers. Ask your parents if you could have a few people over for a movie or a bonfire. Its easier to talk to the guy you dig if you’re in a social setting with other people instead of a one-on-one scenario, which will definitely make you freeze up. Relationships don’t happen over night (as wonderful as that would be), so just work on getting to know each other. I’m glad that you aren’t even considering having a friend tell him how you feel, its up to you to voice your thoughts. If you feel a love connection, make a move. If he doesn’t feel the same way, you will be embarrassed for .5 seconds, but at least you’ll have no regrets, which is what he’ll be having when you move on to another more amazing guy and leave him in the dust.
As for Sam, it’s always awkward when you find out someone likes you and you think to yourself “Huh? Sam who? How do we know each other?” If you don’t know him, don’t feel bad that you don’t like him. There is no doubt in my mind that you’re a stellar girl, but if Sam doesn’t know that about you, then what basis is there for a relationship? It wouldn’t hurt to get to know him. He may be a diamond in the rough and you may find that he’s more your style than Derek, or he could end up being a killer pal to just hang with. Either way you will benefit. Keep your head up! I am twenty-one and still don’t know the ins and outs of the male species. I can definitely tell you though that it’s worth it to go out on a limb and try.

Jana
ARE BOYS GIVING YOU THE BLUES? CLICK HERE to submit your own problem to be answered on Girl Talk!