How to get a BF this year 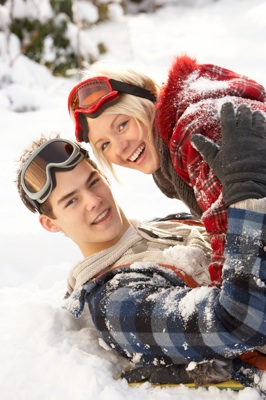 Looking to snag your crush in the new year? Not quite getting the attention of that boy across the room? For you girlies with a New Year's resolution to hone your flirting skills, we've put together a list of six no-fail tips. The best part? These are the rules that generally slip your mind.
He's just as shy as you are. Walking up and starting convo or making a move on a girl is a real feat for him. By not always forcing him to be the one to do those things, you automatically stand out from all of the rest.

It's all in the body language. The majority of your flirting masterpieces are things you aren't even aware of. When you're genuinely interested in somebody, your body reacts differently on it's own. Oddly enough, his body will pick up on these signals and react the same way if he's into you as well. Next time you see yourself leaning toward him or facing him all the time, just let it happen, chica.

Never close off. There's no bigger stop sign for a boy than when you clam up and shut down. So, those things you do instinctively, like crossing your arms, turning your body away, or not speaking much, are taking you out of the game before you could even cross the starting line.

Work with what you've got. Each girl has a different style to work with. Some of us can really pull off the coy thing, or the best friend thing. Or maybe you're an outgoing flirt or a subtle flirt. Find out what style you do best and master it.

Keep the ball rolling. Flirting is like ping pong game. It's all about the back and forth. You can't have a good game if he's not into it, just like he can't really play without you volleying some moves back at him.

Eye contact. Eye contact is the number one most important rule for grabbing the eye of that special boy. It's enough to spark some intrigue when he catches you holding his gaze from a few seats away. It's enough to get him to lean in for the kiss when you're finally alone. Holding a few seconds of eye contact shows your interest better than anything else. Just don't let it go on for more the four or five seconds, or else he'll start to wonder if he has something in his teeth.

Love this post? You'll heart these, too!
» Make him yours by the time the ball drops
» To gift or not to gift – Bill and Dave have the answer!
» Hot holiday date ideas

POSTED IN holiday, new year's, guys, how to get a BF, how to flirt, crush crash course, get his attention now