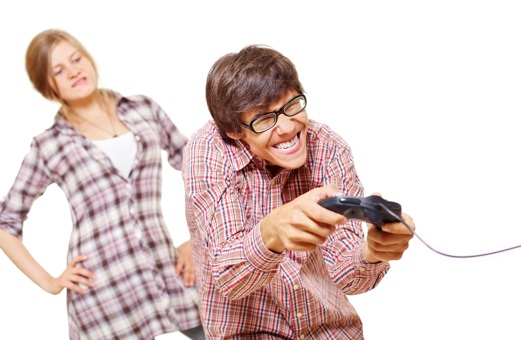 When I was in junior high, I looked forward to the days when guys would be easier to understand. I mean, you would think that over time guys would become less difficult to decode right? Wrong. Unfortunately, you are at the beginning of your journey with these bizarre specimens we like to call boys. No matter how old you get, the same things that puzzle you now will continue to your mind in high school, college and beyond. So instead of trying to figure them out, just accept the fact: men are from Mars and girls are from Venus. It’s that simple—and that will never change!

1. Clueless. Let’s face it: girls aren’t straightforward when it comes to expressing ourselves. We’re hoping our guy will put everything together. Newsflash: he’s not a mind reader. Don’t wait for him to make the first move. Odd those hints won’t register on his radar, even if they’re extremely obvious. Aughr! Talk about frustrating.

2. Playin’ Games. No, not mind games. Video games. The 15 year-old crush going on about playing Call of Duty at the lunch table will grow up to be a 25-year-old sitting at a coffee table still talking about video games. They won’t grow out of it. It’s their thing. You do yours.

3. Bromances. Sure, every girl loves her best friends, but our friendships don’t even begin to compare to bromances. Guys are usually very close to their best friends, and sometimes their love for one another can come off a bit… creepy. The secret handshakes, lame inside jokes, pats on the butts and amateur wrestling moves won’t be going anywhere soon. Don’t worry; you’ll learn to live with it.

4. Do you like me? Check [Yes] or [No] Five years from now you’ll still be sitting on a bench plucking petals off of a rose repeating the classic “he loves me, he loves me not” line. While you watch the petals fall slowly to the ground, one by one, you’ll come to realize: you’ll never know if a guy likes you or not unless he actually says the words, “I like you.” It’s that simple. We are always quick to take every little thing a guy does as a sign, but the truth is—most signs don’t exist. Groundbreaking, right?

5. Quantity over Quality. Looking at this next one a little sideways? Good, that’s because you know the actual saying is, “quality over quantity.” Commitment seems to be a hard concept for some of them to grasp when it comes to the ladies, no matter their age. Give it some time, they’ll soon find out that that’s not the case. In the meantime, find another guy not so caught up with the numbers game. He’s out there.

6. Michael Jordan Scored How Much in ‘98? Guys always seem to have a memory bank chockfull of random sports factoids. Don’t be surprised when you’re sitting down next to your future boyfriend 20 years later and he says “Oh yeah, Kobe Bryant scored 81 points with Lakers back in 2010.” Why they don’t save all that brain space for—I don’t know— important stuff, like your middle name? We’ll never know.

7. The Chase. For some twisted reason, boys will forever like to be the ones chasing or pursuing a girl. They want a challenge. So if you are easy to get, they’ll be less attracted to you. On the flipside, the more you reject him, ignore his phone calls and act uninterested, the more interested he’ll become. Always wanting what he can’t have. Thank human nature for that.

8. Ex Out Emotions. We’re more open about our emotions than the opposite gender. This is a fact. And yet, guys truly do not understand why something is bugging us. In return, we don’t understand why they don’t understand! They chalk it up to, “You’re making a big deal out of nothing.” This is when you take a deep breath and calmly explain to him why you’re upset. If he doesn’t get it, don’t fret. It takes practice—and a whole lotta patience—for guys to grasp empathy.

9. “We Need to Talk.” Boys and men are both terrified of this little itty-bitty phrase. But why? Can you imagine that It has never occurred to them that we truly do just want to talk about a concern, our hectic day, the state of our relationship or anything else for that matter!? However, since the beginning of time, guys have avoided having any conversations that begin with those four simple words. Ooh, so scary big guy!

10. Cue the Drool. Models, singers, Selena Gomez. Guys will forever swoon over celebs excessively. You’ll still have to deal with their never-gonna-happen fantasies like, “That Emma Watson chick is so hot—blah, blah, blah.” Sure, it’s annoying, but you’ll manage. Just tune him out and say in your mind, “Yeah, right.” No need to bruise his little ego.

+ Hundreds of tips to get (and keep) his attention

+ Real guys reveal what your crush is really thinking