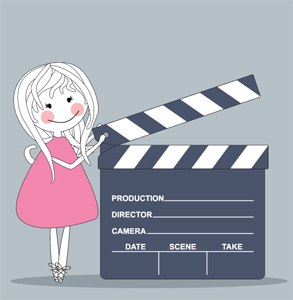 So here’s the sitch: it’s Friday night but you’re low on cash. Your friends are dying to see a movie but after watching Twilight 20-plus times, you want something a li’l different. Well, no fear, girlie. Instead of going to the movie theater and paying that ticket price to see all the new releases, round up the girls at home and rent a classic movie from back in the day.
These six flicks are timeless classics that are bound to make your evening a blast! Pop some popcorn and break out the PJs.


Breakfast at Tiffany’s (1961): Before Blair Waldorf was crowned queen of the Upper East Side, there was Holly Golightly (Audrey Hepburn). Effortless, classy, and ultra-independent, Miss Golightly meets her match when new-to-the-city writer Paul Varjack (George Peppard) moves in the flat above her and falls for her. Set in New York City, this film is all about friendships, parties, wealth, and finding that right guy (and yourself) in the process.


Make it a double feature! Get your Audrey Hepburn fill with another classic, Roman Holiday (1953). Set in gorgeous Italy, the film features Audrey Hepburn in her first leading role as Princess Ann, a royal doing a press-tour of Europe. Sick of the palace life, she ditches the crown for a day among the locals—led by charming, American journalist Joe Bradley (Gregory Peck, grandfather of 10 Things I Hate About You’s Ethan Peck) of course!


Casablanca (1942): The ultimate romantic classic, Casablanca is the story of Rick Blaine (Humphrey Bogart), a rough-around-the-edges American running a nightspot in Casablanca, Africa, as people move in and out to escape to America during World War II. Things are going smoothly—that is, until he runs into his former love, Ilsa Lund (Ingrid Bergman). With two tickets out that everyone wants, Rick must make the ultimate decision with everything at stake.


Make it a double feature! Go back to the South with Gone With the Wind (1939). Starring Vivian Leigh as Scarlett O’Hara, the film tells the story of the Southern belle as she faces the Civil War and its aftermath—all while going for the Mr. Wrongs and batting heads with the Mr. Right, Rhett Butler (Clark Gable), in the process!


Some Like It Hot (1959): Go for a laugh with the Marilyn Monroe comedy Some Like It Hot. Two struggling musicians are on the run when they witness a crime and have to pose as an all-girl band to keep the villains off their tail. The prob? They both fall for two dazzling ladies while having to keep up their disguise, one of the two the lovely Miss Sugar Kane (Marilyn Monroe) who dreams of wealth and yachts.


Make it a double feature! Get musical with Marilyn Monroe’s Gentlemen Prefer Blondes (1953) a story about two singers and best friends who dream of making it to Paris. Working on a cruise line, they sing and meet plenty of suitors including their Prince Charmings along the way—but will their friendship stay?