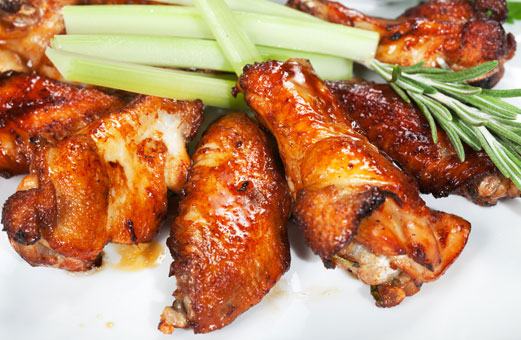 Thought your days of too-full plates were over come Jan. 1? Think again. According to the Calorie Control Council, Super Bowl Sunday is the biggest day for overeating in America after Thanksgiving. But instead of seconds and thirds of mashed potatoes and pumpkin pie, chances are you’re loading up on snacks. Here’s how to lighten your plate without missing out on football’s fabbest feast.

Try…tortilla chips, but the really good ones with just a few ingredients on the label. Think: Mission, Xochitl or Garden of Eatin’

Even better? Try…splitting your dips half-‘n’-half between raw veggies and chips or whole wheat crackers

Try…whole-wheat pretzels without the funky flavorings.

Even better? Try…homemade popcorn. A big pot, a bit of oil and some corn kernels—that’s all you need, and it’s way better than the microwave variety.

Instead of…handfuls of roasted peanuts

Try…peanuts in the shell, which eliminates the salts and sugar and slows ya down.

Even better? Try…Edamame. Buy a microwave steamer bag, cook according to directions, sprinkle with a smidge of sea salt and munch away.

Try…baked chicken wings with dipping sauces on the side if ya really want them.

What’s on the menu at your family’s Super Bowl shindig?

POSTED IN healthy eating 101, how to cut out junk food, Super Bowl