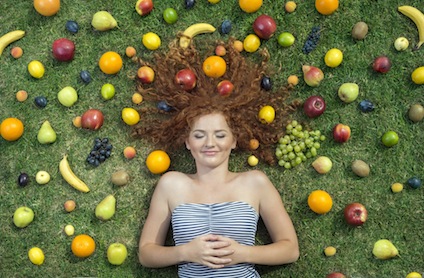 The winter of 2011, I became allergic to, well, just about everything.

Well, not everything, but it sure felt like it. Foods I had eaten for years suddenly felt like poison to my body. My weekly sushi meals suddenly became a death trap, my fave veggies were no longer an option and I ended up in the emergency room with anaphylactic reactions 19 times in three months.

Safe to say I became a little scared of food. Most people think food allergies are sort of a ‘since birth’ sorta deal (if they even think about food allergies at all), but you can actually become allergic to something at any time. My life? Exhibit A.

I went from a girl who could basically eat everything on a buffet to subsisting on a diet of beans and rice. I dropped ten pounds and watched as my hair began to thin and fall out in small clumps. It wasn’t that I didn’t want to eat, I was just afraid to.

I developed something that is medically referred to as Selective Eating Disorder, a disorder that falls between an eating disorder and just being a picky eater. Finally, after a stint in the hospital, a halted period and blood tests that showed how severely I was lacking vitamins, I realized I had a problem and needed to change my ways.

Slowly but surely, I added foods to my diet, with one exception: every ingredient listed on the package I had to be able to find in a pure form in my kitchen. I made this rule for myself so I could easily keep track of the ingredients and ease myself in to foods once again.

In other words, I began ‘eating clean’, a term that basically means eating the purest, healthiest versions of foods you can. I limited processed foods (especially those produced in factories that use nuts, one of my many allergies). I started drinking fruit juices that only had the fruits listed as the ingredients (Naked O-J is probs one of my fave things in my fridge). I began purchasing organic and locally grown veggies and limited my wheat and gluten intake.

I soon found that my skin and hair were both healthier. I had more energy. And I wasn’t afraid of what would happen to me if I ate something because each ingredient on the package was something I could identify and (most of the time, at least) pronounce. I know exactly what I’m putting in my body. That’s a big deal!

Eating ‘clean’ has changed my life, one frozen grape for a sweet snack at a time (seriously, try them, they’re so good). Although studies have shown the benefits of eating purer, unprocessed foods, it wasn’t really a believer until I could feel the benefits and changes in my lifestyle.

My ‘clean’ food has given me a clean slate, a fresh outlook on life and a happier tummy.

Clean eating may not be for everyone, and that’s ok! Maybe try it out, ease yourself in to it, or just simply substitute some foods for healthier options.

I mean I even have my moments when I just need dirty food—well, not dirty, but whatever the food is, it’s certainly not clean. Like, Oreos? I mean, how can you say no to Oreos? And I don’t question what’s in McNuggets because I just really love them on a long road trip. But all in all, the whole pure food thing has worked out pretty well.