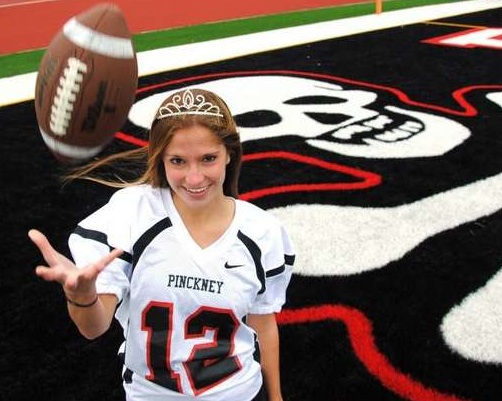 Meet Brianna Amat, the 17-year-old Pinckney Community High School senior. Brianna is not only the reigning Homecoming queen, but also their newest football hero. Brianna, much to her surprise, was crowned Homecoming queen at half-time at last week’s game, proudly rocking both her football uniform and the standard issue rhinestone encrusted tiara. Following the parade and festivities, Brianna raced back to the game to kick a third-quarter 31-yard field goal propelling Pinckney, the ultimate underdog, to a 9-7 win over their opponent, Grand Blanc. Brianna is one of just 28 girls who played high school football in Michigan this year, a number which varies year to year.

A talented varsity soccer player, Brianna has been playing soccer since she was three years old, and it was actually her soccer coach’s bragging about her incredible foot that led her to her position as Pinckney's kicker.  Brianna is an inspiration on the field and off. Not to mention a fab example of how a girl can do it all: win the game and walk away with the crown.
Photo Credit: AP Photo/Daily Press & Argus, Alan Ward

» 3 steps to a healthier Halloween