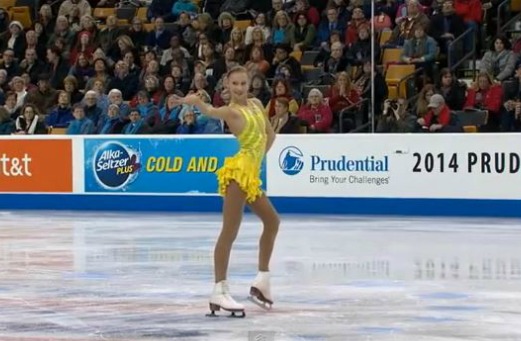 The U.S. Figure Skating National Championships took over Boston last weekend—and the small screen. While the competition isn’t an Olympic qualifier per say, it’s still a big deal, especially in an Olympic year. And with Sochi less than a month away, you can bet all the ice queens and kings were feeling the nerves when they pulled off those skate guards and gave it their all.

There was one big shocker when the Olympic committee announced the three senior ladies who had earned a spot on the singles figure skating team, though. At the top of the list? Gracie Gold, who won the event and is being talked up as America’s new figure skating darling. Next to her stands Ashley Wagner, the most veteran senior ladies skater on the team who missed going to Vancouver four years ago by the skin of her teeth. And third? A major surprise: Polina Edmunds, 15, who skated for the first time with the seniors at the national championship. And she placed second.

While people continue to debate whether or not Vancouver medalist Mirai Nagasu should have made the team, as she placed third at the championships, ahead of Ashley, we have to say we’re pleased as punch to see Polina going to Russia. She is the liveliest skater we saw all day (and kind of reminds us of “the Flying Shrimp” in Ice Princess).

Take a peek at her short and long programs below…

Editor’s Note: Mirai is currently appealing the Olympic Committee’s decision to exclude her from the team. We’ll see what happens!

+ Make your heart healthy with this workout