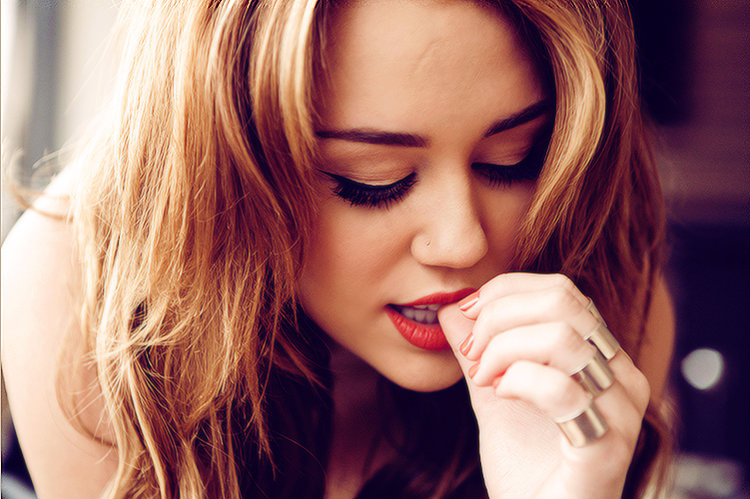 When I sat down at my laptop to start writing this piece, my right thumb was actively bleeding (don't worry, just a tiny bit) and my left thumb was healing. Both injuries were self-inflicted: It was harmless, at first, when I mindlessly began to nibble on a sliver of dry skin—but I didn't stop until I had ripped off a thin strip that grew deeper as it grew longer.

My left middle finger is touch-and-go: It's hanging in there for the moment, but you can see raw, inflamed tissue curving along the cuticle. I bit that finger, too.

And despite the immediate, sharp pain or the dull, aching agony afterward or the potential embarrassment of bleeding all over myself in public, I'll probably bite it again. And again. And, yes, again...

Unless I paint my nails.

Give this girl a fresh manicure and I immediately morph from a nervous nail-biter into my much more typical, pulled-together persona. With gel on my fingertips, I am unstoppable: wearing some cool, unexpected color (a lot of violet greige, lately), I'll gesture emphatically with my hands while telling a story.

I'll clack-clack-clack on my keyboard with reckless abandon, every so often glancing down and finding comfort and confidence from that pretty pop of color.

I'll shell out my hard-earned cash like clockwork, every two weeks, for a fresh coat of paint that'll keep my finger-chomping in check.

And I'll act like it's no big deal when I get a compliment on my hyper sparkly, high-shine cerulean gel mani—but sercretly I'm beaming inside because it's my thing and I always have good nails and it doesn't matter if I'm wearing no makeup with my hair a total mess because at least a part of me is perfect.

The truth is that every time I stop polishing my nails, I return to a habit that's haunted me for most of my life.

And now, thinking back to the origin of my biting, I realized that I don't actually know whether I really and truly love nail polish—or if I just love feeling in control of my cuticles.

So how did I get here...and how can I fix it? After much mulling, it hit me: Maybe it all started at my first violin lesson. (It was a truly traumatic experience that I must have blocked out until this very moment.)

I remember skipping into the music school, my chic string instrument in tow, ready to become a prodigy. I wore a plaid jumper (my school's uniform), my hair tucked neatly back in a black headband, with my nails freshly polished in a very subtle French manicure—a manicure that my mom had given me the night before.

It was our thing, you see. I wanted pretty nails like hers, and once I finally grew them out long enough, we'd spend Sunday nights sitting at the kitchen table together—just the two of us, sipping chamomile tea past my bedtime, and she'd carefully paint my tips in the palest of pink or a nearly invisible nude. I loved it: the polish and the process.

So when I showed up to that first violin lesson and was told I'd have to cut my nails to the quick—they'd interfere with properly playing the strings—I was devastated.

I went home, cried, bit all of them off—and then never looked back. I kept up with my lessons and went on to perform a solo in the talent show, a moment that *still* to this day makes my mom proud.

But...could nixing my nails for violin—the brutalness of biting them all off—be responsible for my horrible habit so many years later? I'm obviously not an expert, so I called one.

"Nail-biting is often a stress-relieving pattern," psychotherapist Jessica Kaplin in Towson, Md. told me. "For you, it occurs during times of anxiety or excitement, but also when you're bored or inactive."

Kaplin explained that habits are a way our brains conserve effort. So while you might think of your only habits as things like saying "um" all the time or scrolling through Instagram whenever a commercial comes on, we actually rely on them all the time.

"Think about when you first learned to do something—like braid your hair or drive a car—and it took such intense concentration and intentional thought," explains Jessica. "But after a while, all the habits you form around driving or braiding are what make them feel like second nature to you."

Bottom line? Apparently I bite my nails because I developed a longstanding behavioral and neurological habit that gets triggered when I am without polish and find myself anxious or deep in thought. (Me - polish + boredom - biting.) And while it's impossible to say whether it startd with my violin debacle, that's the story I'll stick with.

So those times when I *am* wearing perfect polish? I trained my brain to cope in another way. Painting my nails, but then not biting them, became its own habit: So while I might be stressed or anxious while well-manicured, I'm able to leave my nails alone.

Thinking about my biting as a learned mechanism was empowering. Once I understood that I don't have to be a nail-chomper—that it's not a life sentence, but just a lazy trick my brain picked up—I taught myself to break the habit by taking a deep, calming breath every time I feel the urge to chew. It's not second nature quite yet, but it's really starting to work.

Four weeks later, my nails are still naked and my fingers are without wound. Despite my worries, my life didn't fall apart due to the loss of lacquer. And while I'm most definitely still smitten with pretty polish, now I know that if I want to invest my time and money in a manicure, it's because I want to—not because I need to.