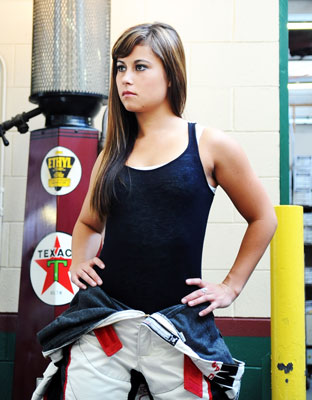 Shannon McIntosh, 21, never thought she would be making her living driving a racecar when her dad took her to her first race when she was four. A competitive kid, she began to practice and compete, and by the time she was 10, Shannon was racing against adult men. She’s been racing ever since. Today, she competes in INDYCAR’s Mazda Road to Indy USF2000 National Championship Series.

We chatted up this ah-mazing automobile racer and got the dish on her dream job.

What do you enjoy most about racing?

The competitive nature of it. It drives me to work hard, train hard on and off the track and to be the best.

What is the most challenging part about racecar driving?

Believe it or not, people don’t realize that the toughest part about racing happens off the track. Racing is really expensive and you have to get the money to do it, so during the week I’m always working towards getting sponsorships, partnerships and scholarships to keep competing.

What’s the best moment you’ve had so far in racing?

In February, I was signed on to my team, CAPE Motor Sport. It was so hard trying to get everything together and when I got everything on board, it was a great moment because we got people to support us. That was really a great moment for me.

You’re following in Danica Patrick’s footsteps—er, skidmarks—as the only female driver to advance through the USF2000 National Championship Series. How does that make you feel?

When I started racing I was completely oblivious to the fact that there weren’t many women in the sport. Just because you’re a girl, it doesn’t mean you can’t compete, especially in a male-dominated sport. Being the only female drive in the USF National Champ Series motivates me more to be much better and to keep competing. 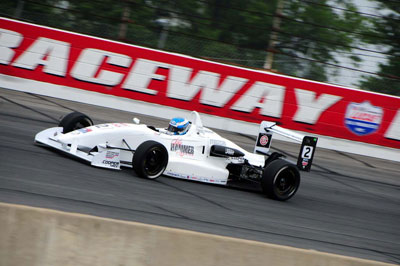 You went to college at the University of North Carolina, but you left before graduating. Why?

I graduated high school with honors and was working on racing at the same time. I wanted to continue my education, so I went away to college. I went to North Carolina because there’s a lot of racing there, and I did really well my first year at UNC, but my family didn’t really have the money so I had to work [my way through]. And at the same time, I was still trying to do racing. I finally decided that I wanted to put 110-percent towards my dreams, so I left school to pursue racing and I’m so happy about the outcome because I’m doing what I love!

Did you learn anything in college that you’ve embraced or incorporated into your driving?

You dream of being the first female driver to win the Indy 500. What does that mean to you?

It’s what I live for. I want to break a barrier for women and show that dedication and hard work is what it’s all about. At the end of the day, I’m a racecar driver, it’s what I do. The Indy is what motivates me to get up in the morning, to show how great I am.

What is a piece of advice you would give to young girls who are pursuing their dream career?

Confidence is the number one piece of advice I can give. It’s the number-one thing that can make you successful. My mom said to me, “If you’re not confident but can fake it, people will believe and soon you will believe it and you’ll become it.” Don’t let being in a “male industry” keep you down. Be the best and give all you can.

One of McIntosh’s sponsors, Glass Hammer Racing, has developed a program to encourage young girls to get into racing. Check it out here at www.beatbyagirl.org.