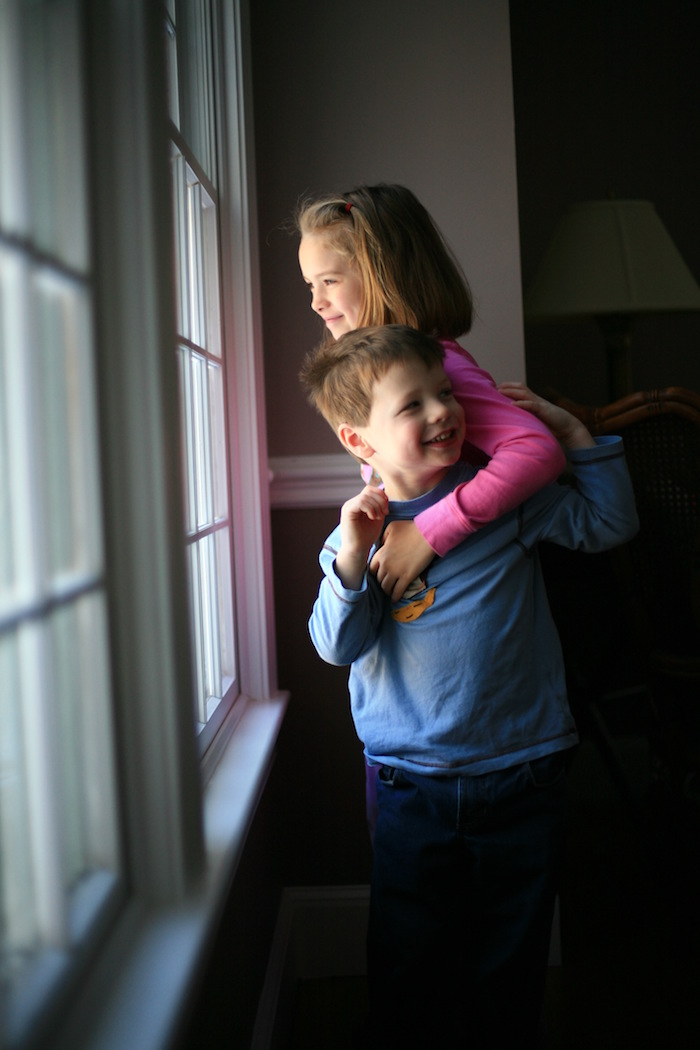 Amy and Jack are like most sibs—they love hanging in each other’s room, soaking up the sun on summer vacays and eating ice cream ‘til they can’t move. But there’s one major thing that has given Amy a new perspective on life. Here’s her story.

“True love.” What is it? Where do you find it? How will you know when you’ve found it? Being a high school student, I hear people talking about - scratch that - obsessing about this subject all the time.

The whole concept of unconditional love strikes fear into my friends. But I don’t have to stress about it because I’ve already found it. It comes in the form of a blue-eyed, freckle-faced boy: my 11-year-old little brother, Jack.

It’s funny - my parents tell me that they weren’t expecting me to love my brother immediately like I did. I guess it’s a good thing that i don’t remember much from my “terrible threes,” as my mom calls them - but I do have one good memory of that year, and that was the day I met Jack.

“I’m meeting my baby brother for the first time! What should I wear?” was my excited reaction when I learned he was born on that rainy day in late September 2003, followed by a “We can’t leave him, he’s special!” when I got to the hospital and discovered he wasn’t coming home right away due to a hole in his heart.

My parents thought I’d be jealous of all the attention he was getting, but I never was.

And since then, Jack and I have done some pretty fun things together. We’ve lived in three different states, taken planes, trains, and automobiles across the country and have run around Nantucket near our home in Boston on summer vacation, stuffing ourselves silly with gigantic, ice cream-filled waffle cones before soaking in the sunshine on Surfside Beach.

Call it cheesy, but Jack’s happiness really does make me feel great. Whenever I’m having a bad day, just thinking of his radiant grin with those gigantic front teeth is all it takes to make me feel better. Looking back on our sibling timeline, we’ve been through so much - and I could never imagine what life would be like without him.

That’s not to say our lives have been easy. I don’t know if Jack wants me to pity him or not, but I really do feel bad for him when he’s trying to say a word that my family and I can’t understand, or when people make fun of him. You see, Jack has severe autism.

Autism Defined
Autism, also known as Autism Spectrum Disorders (ASD), is a wide range of developmental disorders. They affect a person’s behavior, as well as his or her ability to communicate and interact with others. In short, with autism, the brain handles information differently.

To this day, there is no known single cause of autism, and it affects individuals differently and to varying degrees of severity. There are those who are classified as “high-functioning” - they’re able to interact with others and lead a somewhat normal life at a regular school.

But Jack has severe autism, which means he can barely talk and has aggressive behaviors. For example, when he’s mad, he can’t physically say, “I feel mad,” so he’ll bit or grab us to communicate without words.

Jack has repetitive behaviors (also referred to as self-soothing), like flapping his hands, and he has a sensitivity to certain lights. He loves hanging out with me in my room - but he always wants the lamp by my bed on, and the one on my dresser off.

Big Differences
Because Jack might become violent when he gets angry, strangers seem to be scared of him. Some freak because he doesn’t understand the idea of personal space, either (he’ll run up and hug you, even if you have no idea who he is).

People whisper about him right in front of his face. They stare at him. They stay as far away from him as possible.

I’ll never forget the day we went to Bertucci’s for dinner, and an older couple sitting at the table behind us made a scene. They waved the waiter over and asked to be moved because of the way Jack was acting. It hurt because, while loud, Jack was trying to enjoy himself like everyone else in the restaurant.

I’ve tried to wrap my head around why people would act that way to someone they don’t even know, and all I can think is that it’s because he’s “different.”

I think we’re all a bit intimidated by people who aren’t like us. That’s probably why my friends and I have similar interests and personalities. It’s like that in most of the friend groups at my school. I admit I’m comfortable around people who aren;t like me when I first meet them. I think it’s probably because we don’t have much to talk about. But just because someone is different doesn’t mean you have the right to make fun of them.

To put it bluntly, people with autism are humans. They’re people with real feelings just trying to be understood in this crazy thing we call life. So rather than focusing on the concept of disabilities, why not look at people with autism as individuals with different abilities? They’re just as amazing as you.

Speaking Out
The coolest thing about Jack? He seems to believe in himself, no matter how others act around him. I admire him for his confidence. And I’ve learned it’s disrespectful to assume what someone is thinking if they don’t say it themselves. Imagine how you would feel if someone spoke for you all the time without consulting you.

Because of Jack, I also know the true value of patience. Since he has trouble talking, he has an iPad with a talking app that, I’m not gonna lie, is pretty cool. It might take him a while to find the word he’s looking form but I now know it’s worth the wait to find out what he wants to say.

Since autism is so common (the Centers for Disease Control and Prevention estimate 1 in 68 children in the U.S. has Autism Spectrum Disorder), I run into it everywhere. And the biggest thing I tell people about interacting with someone who’s autistic is to have patience.

Helping Heart
I’m not kidding when i say I won’t be friends with someone if they don’t treat my brother - or anyone with autism - with respect. One of the most amazing things I’ve witnessed in the autism community is what people who love someone with autism will do to help them.

Take my mom, for example. Instead of sitting around feeling sorry for herself, she’s gone out and worked to get autism insurance laws passed in more than a dozen states including Texas, New York and Virginia. She has inspired me to help the many struggling people out there who are on the autism spectrum, too. Last fall, I raised over $2,500 for Autism Speaks, a leading autism science and advocacy organization. Helping to fund research is so important because there is currently no cure for the disorder.

Bright Futures
I have a lot to look forward to. I just finished my freshman year of high school and, after a record-breaking snowiest winter in Boston, I’m super excited to hang out on Nantucket with Jack and the rest of my family again in July.

Since I still have a few years of high school left, I’m not sure exactly what i want to study in college, but I do know that I want to do something to help people with autism - whether that means being someone who affects laws like my mom or a doctor who helps find a cure.

No matter what, I look forward to my future with Jack by my side. I will always have my brother, and he will always have me. That’s how I know that he’s my true love. We’re siblings, so of course we get annoyed with each other like typical brothers and sisters. But no matter what, I love him and he loves me. He can’t say it, but I know that he does when he smiles at me, or laughs at one of my jokes, or comes up to my room to hang out with me while I’m doing my homework. And to me, that’s all that matters.

Acting Out
According to the Centers for Disease Control and Prevention, autism is the fastest-growing developmental disability. While no two individuals with autism are completely alike, meaning interactions must be catered to each person, here are a few things to keep in mind when communicating with someone with autism.

Keep your tone in check. Talking very loudly or yelling can trigger anxiety or panic attacks.

Be direct. Skip the sarcasm. Many people with autism often take things literally, so it’s easier for them if you say what you mean.

Discuss something they love. Since many people with autism have a strong interest in one subject, talk to them about it to facilitate conversation.

Don’t take things personally. People with autism often don’t pick up on social cues like you do, so if they say something harsh, they might not mean it that way.

Autism Answers
Dealing with autism on the daily - or just want to know more? Try these resources....

Autism Speaks
Get tool kits on everything from fundraising plans to diagnosis details.

Sibling Support Project
Find support events or connect with other sisters and brothers of people with special health, developmental and mental health concerns.

Autism Now
Use their interactive map to search the growing collection of agencies near you that offer services and resources centered on autism and other developmental disabilities.

The Arc
Become a member to gain access to their online community and message boards, which offer support on sitches unique to your experience.

This article orignally appeared in the June/July 2015 issue of Girls' Life.