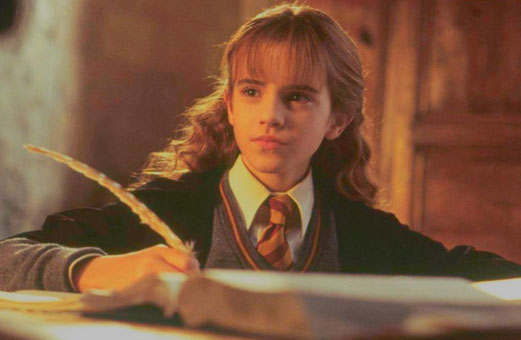 Today, one of our favorite smart girls of all time celebrates her birthday. Even though Hermione Granger turns 32 today, per Harry Potter book time, we’re still obsessing over this know-it-all’s best moments. For those of you languishing in your muggledom, here are Hermione’s 10 best lessons for handling life’s stickiest sitches, sans magic.

That’s what she said: "Just because it's taken you three years to notice, Ron, doesn't mean no one else has spotted I'm a girl!"

Lesson: Sometimes, you’ve gotta speak up. And if that means asking him to the Homecoming dance, then do what it takes to get yourself that date.

When your guy friend sighs again over all the girl drama…

That’s what she said: "Just because you've got the emotional range of a teaspoon doesn't mean we all have."

Lesson: Most boys honestly don’t understand the way girls function a lot of the time. While we tend to act based on emotion and spend more time thinking things through (and then obsessing over things once we’ve done them), they are more logical. They do what they want to do, and then they move on. Taking the time to explain why you’re in a snit instead of huffing with irritation will give them a clue what’s stressing you out.

When your adventurous buds drag you along on another risky scheme…

That’s what she said: "I hope you're pleased with yourselves. We could all have been killed—or worse, expelled. Now if you don't mind, I'm going to bed."

Lesson: Emma Watson’s favorite quote from the series is one of ours, too. Channel her character’s utter exasperation when you’ve had it up to here with their ridiculous antics. Opt for a li’l hyperbole to make your point without causing World War III.

When your lab partner messes up…again…

That’s what she said: "You're saying it wrong," Harry heard Hermione snap. "It's Wing-gar-dium Levi-o-sa, and make the 'gar' nice and long."

Lesson: Ditch the insufferable know-it-all ‘tude and the correction becomes helpful rather than snooty. Five points to Gryffindor!

How to win an argument…

That’s what she said: ”At least my happiness doesn't depend of Ron's goalkeeping ability."

Lesson: Calling other people’s interests and obsessions stupid will only offend them. But this gem will at least get them to understand (and possibly agree with) your point of view, even if it won’t sway their passion.