"The climate crisis isn't about the future. It's about now—and here's why I'm standing up." 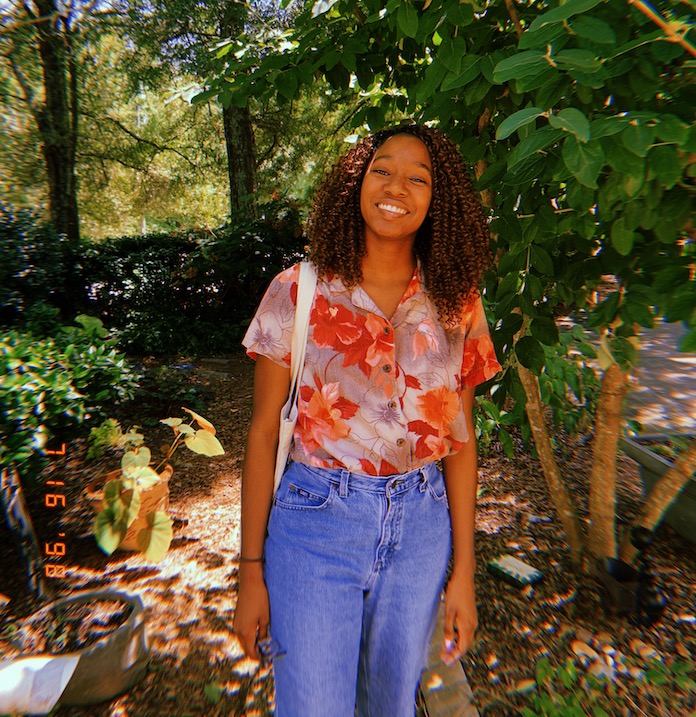 Like many of us, Andrea Manning, 20, found it challenging to relate to the environmental issues she heard about on the news. But once she learned that the first to feel the effects are places like her own community—she committed herself to educating people of *all* ages and backgrounds.

When I first heard about climate change, it wasn't something I could connect with. I'd see pictures of polar bears standing on chunks of melting ice and know it was a major problem—but for me, polar bears seemed like fictional characters from a kids book. It was hard to make climate change real. I couldn't understand how it affected my life.

But a few months before I graduated from high school in 2018, I heard about a youth-led organization called Zero Hour, which was working to alleviate the impact of climate change. (The name comes from the fact that we literally have no time left to address the damage already done.) Spearheaded by then 16-year-old Jamie Margolin and co-founders Nadia Nazar, Madelaine Tew and Zanagee Artis, they were looking for other teens to be part of their global launch—and wanted to organize a march in Atlanta, where I'm from.

As soon as I learned about Zero Hour, I knew I had to get involved. Why? Because being part of Zero Hour taught me that climate change isn't just a far-off problem. It's a problem that impacts every single one of us right now.

Around the world, there is evidence of climate change: Look at the devastating fires in Australia, the blazes in California or the hurricanes in Puerto Rico. But it's also affecting us in ways we may not realize, especially for those in urban neighborhood and for black youth like myself.

I have a friend in a Midwest city who has asthma and has to deal with poor air quality. I have disabled friends who'd have a much harder time escaping if something like a flood happened. I've seen droughts here in Atlanta where we can't turn on our water for a long time.

The truth is that climate change isn't just an environmental problem, it's a people problem—and it's going to take people to change this. And this is *the* problem of our generation.

So, I'm doing whatever I can to conquer climate change. Even though I'm still in college, I dedicate time every week to Zero Hour. It can be pretty hard to balance, but this crisis is not going to end without us putting in the work.

At Zero Hour, we call ourselves Gen GND, which stands for Green New Deal. Our goal is to advocare for change by changing the culture. The best way to do that? Elect officials who will craft and pass legislation that's going to protect people and the planet.

Our first Zero Hour march was held July 2018 in 30 cities globally, including Washington, D.C. There, hundreds of youth met with 47 senators and their staffs to collect signatures for the #NoFossilFuelMoney pledge, which aims to cut back on fossil fuels, known to emit damaging toxins and pollute our air and water.

In 2020, our goal is to influence those who are able to vote so we can continue to make changes in legislation. Because the scary truth is, we're in a climate emergency. Statistically, we only have 10 years left to act and take drastic action before it will be impossible to reverse the change. The reality is undeniable: time is running out.

Zero Hour has the capacity to make a big impact—and I want to continue being part of the movement. There's a perception that there aren't a lot of black youth at the face of these issues, but a lot of the organizers I work with are people of color and come from marginalized backgrounds.

When I was younger, I definitely wasn't thinking about our environment. But I do see that a shift is happening. The increase of student-led strikes and marches shows that young people from all backgrounds really care about this issue.

It can be hard to see the very real effects of climate change. But finding a connection can help you become more aware—and hopefully more involved. Maybe you love wildlife and were heartbroken by the estimated 1 billion animals that perished in the Australian wildfires. Maybe you have friends who live in communities at risk for flooding. Maybe you have relatives in fire zones.

The bottom line is that we're *all* starting to realize that climate change is an issue that needs to be addressed in our communities. It impacts young people, old people, black people and white people. It affects every race, class and marginalization. But it's only if we continue to educate everyone that real change will *finally* happen.

Want to get involved in the fight against climate change? Andrea suggests starting or joining a chapter of Zero Hour or another organization in your area. And recruit adults, too! "Ask them to help you plan, coach you to talk to elected officials and be a sounding board to talk about your ideas and feelings about climate issues," she says. "If they don't respond enthustiastically, don't let it discourage you. Just keep at it. Figuring out how to make a difference on a smaller scale ultimately helps to make larger scale change happen."

Hey, girl! Just wanted to let you know that this story originally ran in our April/May 2020 issue. Want more? Read the print mag for free *today* when you click HERE.