The secret life of the American firework 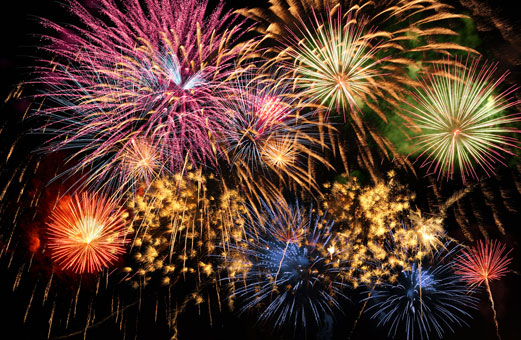 Every year on the Fourth, you and the fam pack up your lawn chairs and head to the best spot for viewing your town’s fireworks display. But have you ever wondered how they work? You don't have to be a science nerd to dig these deets!

What's it all about?

Those bright lights and loud booms that you’re hearing are caused by explosions of precise mixtures of chemicals and fuel. The sound shows up because of the huge amount of energy that is suddenly being let out into the air, causing a shock wave. And the colors appear when the metal salts within the fireworks get heated up, because then their specific elements will produce different amounts of energy. Higher energies will have shorter wavelengths of light, creating purple and blue mixtures of color. Lower energies make longer wavelengths, so that red and orange shades appear.

The whole process of igniting firework begins when someone lights its main fuse. Then, there are actually two fuses that go to work – one is fast action, and the other is time delay. The fast action is so that those chemicals get lifted up in the air and away from people ASAP, while the time delay creeps slowly toward the chemicals. Once the time delayed fuse reaches those metal salts, the colors and the noise is released, and that moment is perfectly timed so that it occurs when the fast action fuse runs out. If the fuses are off for some reason, all that energy might burst out when the firework is too close to the ground, which could be very dangerous. So if you wanted an exact science, making fireworks would be it.

Are we there yet?

If you’ve ever wondered why fireworks just can’t get it together and always have their light and sound happening at different times, it’s because they’ve run into the same problem as thunder and lightning – sound just can’t keep up with light. The speed of light is about a million times the speed of sound. So here’s a trick that you can use to tell how far away the explosives are: When you see a firework go off, start counting out the seconds. Stop when you hear the accompanying boom, and divide the number of seconds you counted by 3. That tells you how many kilometers there are between you and those gorge colors.

1. Make sure that there are at least 840 feet between you and the spot where those babies are being ignited. That distance has been calculated to keep you clear of even the largest fireworks.

2. The fuse should never be lit if winds are over 20 mph, in case those flying chemicals blow in a direction they shouldn’t. Officials who run large displays should know that, but check the weather forecast before you head out, just to be sure.

3. Leave your pets at home when you go to see the fireworks. You might think Spot will like the pretty colors, but he’ll probably just get scared when that crazy noise catches up with the light. And you definitely don’t wanna risk having your pooch run off and get lost.

4. If your fam gets some sparklers to play with at home, don’t let your sibs or anyone younger than 12 hold ‘em, because those babies will get hotter than 1000-degrees Celsius.

For more info on the most exciting part Independence Day, click here. Have a safe, fun time watching the explosions, chicas!