Here's why fewer teens are getting their driver's licenses

Getting behind the wheel used to be a major milestone. Today? Diver's licenses are on the decline among teens. Here, GL looks at the reasons teens aren't as driven to hit the road—and why you shouldn't exit this rite of passage. 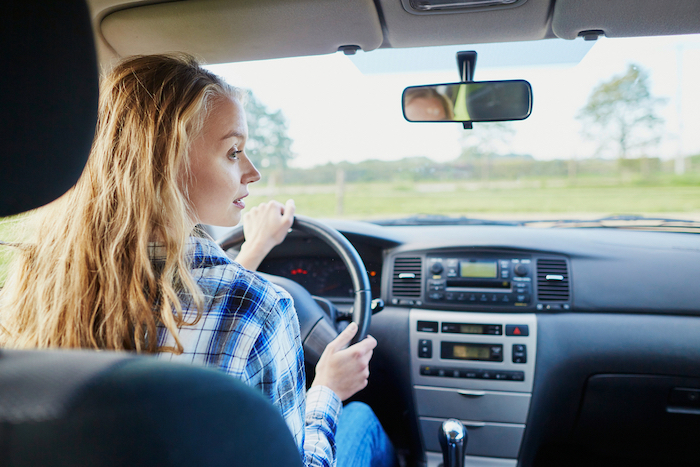 When Emma P.* was 16, she was so busy with school, volleyball and extracurriculars that getting her driver’s license never even entered the picture.

“It wasn’t super urgent,” she says of going after the milestone. “I didn’t have the time to learn to drive, and my parents weren’t giving me a car.”

So Emma waited until she was 18 to get her license. But even now at 21, Emma still avoids driving because she’s so nervous behind the wheel. “You have to get comfortable driving alone,” Emma says. “I never really trusted myself enough to try.”

Emma represents a large number of teens who have opted out of getting a license in recent years. Once a rite of passage most kids wouldn’t dream of passing up, the percentage of teen drivers has plummeted over the past few decades. In fact, a recent study by the University of Michigan Transportation Research Institute found that just about 25 percent of 16-year-olds had their license, down 47 percent from 1983. And while more teens do learn to drive later on, fewer of today’s high schoolers are getting behind the wheel.

Fear takes the wheel
So why are so many teens choosing to stay on the passenger side? Many are simply too scared to hit the road. According to a study by car insurance experts Zebra, one in four unlicensed teens is afraid to drive. In addition, the study shows that teen girls are more likely than

boys to admit that they thought driving was scary, and they were more likely to delay driving due to those concerns.

And it’s not like they don’t have anything real to worry about: According to the Centers for Disease Control and Prevention, teen drivers are nearly three times more likely to be in a serious crash than drivers age 20 or older. The cause of these crashes? Distracted driving, speed and simply being unfamiliar with the road.

Laura Morlok, a therapist based in Washington, D.C., points out that for some teens, getting their license gets wrapped up in the idea of growing up and going to college, which can cause anxiety about “not wanting to adult.” Others are worried about the financial impact of a car and insurance—either on their parents or even themselves if they need to work more to pay for gas.

Parents have plenty of fear, too, which may be contributing to the decrease in young drivers. And because they’re anxious about their kids driving, they are more willing to shuttle teens around to school, sports and other activities until they graduate from high school—or even later.

A lack of urgency
Another factor? The cost and time commitment required for behind-the-wheel training can be prohibitive for busy teens (some states require as many as 50 hours of driving time before you can get a license). Plus, with many teens connecting online, meeting up IRL is a lot less necessary than it was before the days of smartphones and social media.

Morlok says some teens don’t see many immediate benefits from getting their license. “If you’re anxious and there’s not a lot to gain, why are you going to do it?”

In high school, Ava R. never felt a sense of urgency when it came to learning to drive. “When I was 16, none of my friends had their licenses yet and my parents never mentioned anything about it,” she says. “I honestly didn’t even know what age I had to be to get it.”

Lasting impacts
Whatever the reason, it’s clear that a ton of teens are finding other ways to get around than driving themselves. But while the boost in carpooling and public transportation may be great for the environment, lacking a license until later in life can have a negative impact on job or school opportunities later.

Now 21, Ava finds that not being able to drive limits her options, both personally and professionally. She wishes she would’ve gotten her license back in high school, when she had more free time than she does now.

Emma also has seen drawbacks: When she tried to get a debit card, she didn’t have a valid ID, which meant she had to dash to the DMV that day to get a temporary card (which was harder to do, given that she couldn’t drive). And once you’re 18, you need an I.D. card or passport to fly on a plane or see an R-rated movie. And the list goes on and on.

Besides, experts say that the longer you wait to learn to drive, the harder it is to pick up the rules of the road. Think about it: If you wait until you’re older and out of the house, you lose easy access to parents and older siblings who would traditionally teach you the skills you need to get around safely.

Nix those nerves
So what to do if you’re among that 25 percent of teens who are scared of getting a license? It’s time to move past the fear. We get your stress, but it shouldn’t keep you from stepping up and learning to drive. Remember: Driving is a skill that takes time to master— and no one expects it to happen overnight. That’s why teens aren’t just handed keys to the car and told good luck; you have to ease into the role. You’ll take driver’s ed, you’ll practice driving with your parents and pro drivers, you’ll study for the test. It’s all buildingup to the big moment, which means there’s plenty of time before you’re accelerating solo up an on-ramp to a major highway.

“It’s OK to be nervous,” says Fabiola Paul, a licensed clinical social worker and the founder of Enlightening Counseling & Educational Services. She points out that you get your learner’s permit first, and that has “learner” right there in the name.

And if you do hit a bump in the road in the process? Know that you’re not alone. It’s scary to think about getting into an accident— and you should be super cautious at all times—but also know that pretty much everyone will get into a fender bender at some point in their lives. Emma says when she had her permit she got into a minor accident that wasn’t her fault, but the other driver tried to blame her because she was such a new driver. “The whole thing scared me a lot. I stopped driving for a month,” she says. “That was one of the reasons it took me so long to get my full license.”

The therapists we talked to explained if you stop driving because of a scary incident, your body can create a “negative feedback loop.” Basically, you slide into the driver’s seat and feel anxious, remembering what happened in the past. Instead of pushing through the fear, you unbuckle, hop out of the car and feel a rush of relief. Your body starts to associate not driving with that “phew” feeling. And actually pushing the gas pedal is still wrapped up in that fearful anxiety.

Paul suggests getting over your fear by committing to one driving-related activity each day. Maybe you start out as a passenger. Then, you sit in the driver’s seat and get used to being in that position of power. Finally, you drive around, with your parent right next to you. “You can learn from your mistakes, while simply avoiding driving might create a phobia for you,” Paul points out.

The road to freedom
Victoria N., 18, was happy to get her license at 16, even though she admits to being nervous at first. “It gave me a sense of freedom and independence,” she says. “It also increased my awareness for the responsibility I was going to have as an adult.”

If you’re already prone to anxiety and are worrying about driving, or if you’re envisioning yourself crashing every time you even think about getting behind the wheel, consider talking with a parent, trusted adult or school counselor, who might be able to put you in touch with a pro to talk about your fears. Even if you were in an accident or witnessed a crash when you were a kid, you can get past those fears eventually. And then? The road will open up ahead of you. As Victoria puts it, “I probably would have regretted it if I had postponed the process.” Carpe drivem, girl.

This story originally appeared in the February/March 2019 issue of Girls' Life magazine.