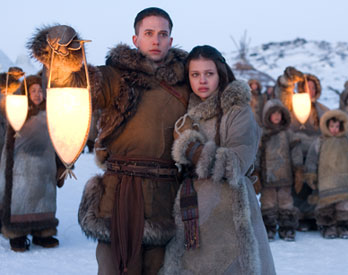 Love action and mystery? Are you a fan of Dev Patel, Jackson Rathbone and Nicola Peltz? Dying to catch the much-anticipated movie The Last Airbender (in theaters July 1) before it hits screens? We’ve got an awesome opportunity just for you.

The Last Airbender follows the story of lone Avatar Aang (played by Noah Ringer), who has the ability to manipulate all four elements: Air, Water, Fire and Earth.  After the Fire Nation provokes a brutal century-long war between the four nations, leaving a wake of destruction, Aang must band together with his water bender friend Katara (played by Nicola Peltz) and her warrior brother Sokka (played by Jackson Rathbone) to restore peace and balance in his world.

Directed by M. Night Shyamalan, this action-adventure, based on Nickelodeon’s successful TV series, is bound to be one of the hottest flicks this summer—and one you sure won’t want to miss.


Catch the trailer of the film below…

WIN BIG!
Want to catch the flick before anyone else, while also spotting your fave stars? If you’re going to be in the New York metropolitan area, here’s your chance!

One lucky lady will score tickets to the movie’s New York premiere* for her, a chaperone and two of her friends. Cool, right? The big night’s happening June 30 at 7 p.m. at Lincoln Center’s Alice Tully Hall. CLICK HERE for your chance to win. Contest ends Wednesday, June 23.

*Please note this giveaway includes four tickets to the premiere only. Paramount Pictures, Girls’ Life magazine and any other third party are not responsible for handling or covering transportation and accommodations for this event.

Be sure to catch The Last Airbender when it lands in theaters July 1. For more info on the film, head to TheLastAirbenderMovie.com.