My friend bullies me at school! 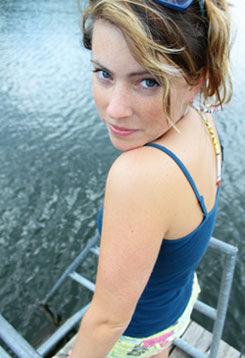 There’s this girl in my school. I thought she was my friend but my BFF told me that at a sleepover my "friend" started talking about me. She called me fat, ugly, stupid and a couple of swears! I can’t believe it. She even wrote that I was a (bad word) on the playground.
Once I had a crush on some guy who’s also my friend and she told him and now he won't talk to me. She’s horrible! I'm afraid to go back to school in August because of her. What should I do?

Have you ever seen the movie “Mean Girls”? If so, then you know firsthand how mean girls can really be and, unfortunately, real life is no different. There are a variety of reasons why girls can be really nasty—from insecurity to jealousy. But none of them are excuses. Get ready for a crash course in How to Deal with a Mean Girl 101.


Speak up for yourself


If there’s one thing bullies don’t expect, it’s for the girls they’re bullying to stand up to them. You don’t need to be violent and you don’t even have to be mean or raise your voice. Next time your so-called “friend” starts calling you names, you could say, “Hey, I don’t know what your problem is, but I’d appreciate it if you stopped. It’s not nice and it only makes you look bad.” More than likely, your friend will be embarrassed you called her out on her mean streak. And if she doesn’t stop…


…Breaking up is hard to do


Boyfriends aren’t the only ones you can break up with. Sometimes you need to say adios to some amigos, too. Here’s a clue: real friends don’t call their friends bad names and talk behind their backs. If your friend isn’t willing to clean up her act and treat you with respect, then she’s not a good friend anyway and you don’t need a toxic friend in your life. Get rid of the toxicity by de-friending her on Facebook and following her on Twitter. The less you see of her—both in school and online—the happier you’ll be. Trust me.


After you cut this girl out of your life, she’s more likely to leave you alone. Bullies often get bored when the person they’re terrorizing doesn’t give them the reaction they want. There is no reason you should let this girl control your life. You don’t need to be afraid of her anymore. You are smart, beautiful and strong. Think of the situation as a learning experience that will help you deal with other less-than-nice people in life. Best of luck, girl!


GOT SCHOOLROOM STRESS? CLICK HERE to submit your own problem to be answered on Girl Talk!