Isn't it? - An original poem 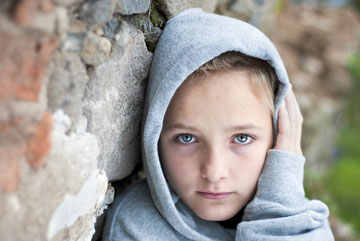 This is an original poem written by Kizzie 14, a GL reader. She wrote it about a girl who is being bullied and would love to know what you all think of it. Leave your critiques in the comments!
Defeated, heartbroken
A single question
Repeats in her head, in her heart
Why me?
She imagines the girl standing over her
Kicking at her
Spitting at her
Shouting at her
Spiteful words that cut to the bone
--with the others she's a gem
The perfect friend
But alone, together, she pushes her down
Tears her apart with her evil words
No one sees the pain
The hurt
The sadness
She holds her head in her hands
And lets the tears flow
Because she's right
Isn't she?
She feels so alone
She can't tell anyone
It would just make things worse
Wouldn't it?
And she doesn't want to hurt her friend
Because she's always like this, to her
It's just the way she is
Isn't it?
Only this time it's worse
This time it's gone on and on
She doesn't know what to do
What to say
Where to turn
Because it's all true

Want to showcase your work? Whether you like to dabble in creative writing, swoosh some strokes on a canvas or snap pics, send us your poems, short stories and artwork to youwroteit@girlslife.com, OR just click “Submit Your Own” below.

Plus! Love to sing, dance, act or play an instrument? Shoot over a video of your star-worthy performances! It could be featured right here!

POSTED IN express yourself, You Wrote It, poetry