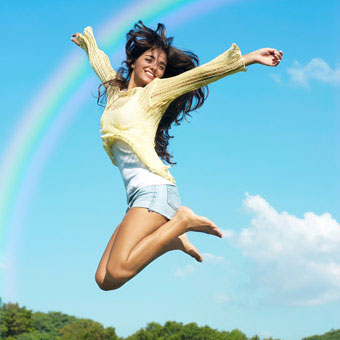 There are optimists…and then there is my father, Bob Bokram. My dad has been on the planet for more than eight decades and, by all accounts, has never had a bad day. Not one.

You ask my dad how he’s feeling? “Great, just great!” How he’s doing? “Super, just super!” To my father, strangers are just friends he hasn’t met yet. And he’s going to meet them. Because the man will talk to anyone and assumes everyone wants to talk back because, hey, why wouldn’t you want to chat with a random person? Basically, my father is the most optimistic human being on Earth.

And for the first two decades of my life, it drove me nuts.

Back then, things weren’t exactly all rose-colored unicorns. My parents divorced and my dad got remarried—all while I was dealing with the usual teen drama. For years, it utterly escaped me how my father could possibly be so ignorant to the many negative things that were happening around him (your wife won’t let me into your house to see you on Christmas and you think everything is “super”? Seriously?!). The, slowly but surely, my own inner optimist finally began to rear its little ostrich-in-the-sand head.

My first tip-off was when I launched GL. After someone told me 90 percent of magazines fail, I smiled and thanked them for the newsflash. In typical Dad fashion, I assumed when they talked about nine out of 10 failing, they meant everyone but me.

Of course, everything wasn’t all smooth sailing from there. In keeping GL going for 18 years, I’ve faced more obstacles than a contestant on Wipeout (yeah, yeah, that show may be stupid, but it’s also totally hilarious).

When people ask what’s the trick to staying positive through challenges that could cause others to throw up their hands, I use a skiing reference. When you’re swooshing through tress, the important thing is not to stare at them but instead to look at the space between them. In other words, keep your eyes focused on where you want to go, not on the Douglas fir in front of you. If you fixate on the tree instead of the powder that lies beyond, well, you’ll end up with bark in your braces.

That’s not to say you shouldn’t acknowledge that serious stuff is going on. But you can also know, in your optimistic heart of hearts, that there is a resolution. You just need to figure it out.

I’ve said it before: I am hardly the smartest bunny in the hutch. I really don’t have any special skills or knowledge or connections. The only redeeming thing about me is that I wake up every day thinking that this is going to be a good day and that I will be able to bring positive energy to everything I do and everyone around me. How’s that working out for me? Great, just great! Thanks, Dad….