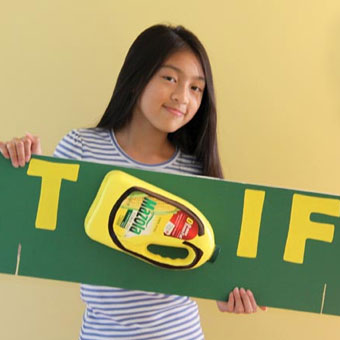 The letters “TGIF” bring happiness to Cassandra Lin, but not for the reason you think. For this 13-year-old from Westerly, RI, they represent Turn Grease Into Fuel, the program she helped create that has become a big success over the last three years for both Cassandra and her community.
What’s TGIF?

According to Cassandra, “It’s a sustainable system to collect wasted oil from restaurants and residents, and then we convert that into biodiesel fuel and distribute the fuel to residents in our town who can’t afford heat.” Without TGIF, cooking grease from homes and restaurants would usually just be thrown away. Thanks to the organization created by Cassandra and her team, the oil can be recycled and used to heat the homes of families in need. It’s a double-win for the environment and the community.

Having a big impact

TGIF collects waste from 96 restaurants and residents in nine towns. “So far we’ve donated 9,200 gallons of biodiesel fuel to charity and that’s helped 92 families,” Cassandra says. “And also by our calculations, that’s offset about 1.2 million pounds of carbon dioxide from being released into the atmosphere because we’re using biodiesel, which is an alternative energy.”

Cassandra and the rest of the TGIF team are constantly coming up with bigger and better ideas. In fact, they are currently working with politicians to have an even greater impact through their organization. They’ve drafted a law that will be going to the state house later this year. If passed, it would “mandate wasted oil recycling for places that sell or produce grease. They have to have a receptacle, so residents can recycle that grease for free,” she explains.

Cassandra has been recognized for her amazing community service. At a ceremony in Washington, D.C. on May 2, 2011, she was named a National Honoree at the Prudential Spirit of Community Awards, a program conducted by Prudential Financial in partnership with the National Association of Secondary School Principals (NASSP). The annual program recognizes middle school and high school students who have completed outstanding volunteer work. Out of the 29,000 students that applied, she ranked in the top-10 youth volunteers for 2011!
Coming a long way

“It got started in 2008 when I visited an expo at the University of Rhode Island,” Cassandra says. “That’s where I found out that wasted oil could be converted into biodiesel fuel. So I got together with my friends and we were like ‘Why not convert this oil and then give that to people in our town who couldn’t afford heat?’” From there, the team began to put the idea in place by doing research, talking to restaurants, and spreading the word through fliers, calendars, presentations at elementary schools, and a public service announcement on the radio.

What you can do

Through her experiences, Cassandra has learned that volunteering has benefits for not only the people that you help, but also for yourself. “When you help people,” she says, “you really feel good about yourself. You know that you’re doing good, you know that you’re helping other people, helping their lives get better.” An easy rule to live by: Do good, feel good.

Interested in starting your own project? Cassandra offers up this advice: “If you want to help others, start with really small steps that you can accomplish. That might just be volunteering at an animal shelter on the weekend, or hosting a fundraiser and then donating everything to charity. But just little things that you can do, that you can actually accomplish –[those] can go a long way.”

Cassandra knows from experience that a small act or an idea can lead to great things. When you get started helping others, who knows where inspiration will lead you?

Love this post? You'll heart these, too!
» Buh-bye, boredom! 100 ways to have a blast this summer!
» 3 secrets to surviving family vacay

» Be a super sitter!

POSTED IN LIFE, Get Inspired, charity, go green, do gooder