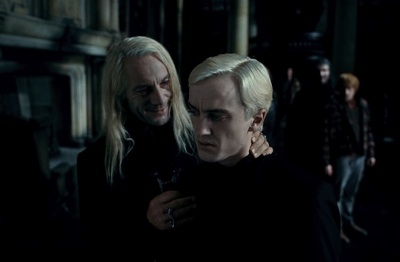 Sure, dads can be awkward. And sometimes we want to be as far away from them as possible. But we always love them!

When you think about your dad, a caring, loving, awesome person that has always been there for you usually comes to mind. So for Father’s Day this year give him the best (free!) present there is: A huge hug for being amazing…and not being like any of these fathers we’ve seen in some of our favorite flicks.

He tried to kill his children before they were even born! Do we need to say more? Well, we will anyway. He’s destroyed entire communities and civilizations and is always torturing people. Who’d want this guy as a father? Not us!

Man, oh man, has this guy taught us to never lie again. He is a lawyer, but he thinks that means he has to lie both in and out of the court. Lying to your friends and acquaintances is one thing, but to your son? Over and over again? That’s just awful. Especially when you tell him you’ll be there for his birthday and pull a no show.

There is no movie father as unsupportive and heartless as this man. No, he doesn’t kill people or destroy places, but he makes his daughter feel like she’s nothing. He tries to rip apart Matilda’s self-confidence and doesn’t allow reading or anything educational. Horrible.

He manipulates the people around him and is mean to all. This self-centered dude doesn’t care who he steps on to get what he wants. Take his stepson Charlie, for example. He makes him do tons of cleaning and won’t allow him to do anything fun!

Maybe having your dad as the president isn’t all that bad, but it definitely has some downfalls. Like always being followed around not only by paparazzi, but by tons of secret service agents, too. This is what Anna has to deal with as the president’s daughter and it’s worse when she falls in love with a guy who turns out to be just another one of her dad’s agents!

Mr. Malfoy is beyond evil. You can tell by his allegiance to Lord Voldemort and all the evil glares and words he shares with Harry! He is gross, rude, and mean to his son, Draco. It’s no wonder Draco became such a snob as well.

Who do you think is the worst movie dad? What’s your favorite thing about your own daddy dearest? Blog about it, babes.