Olympic legends to watch in London 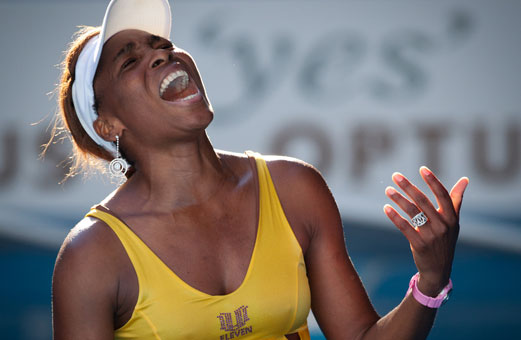 We love a good underdog story, but there’s something simply amazing about watching a veteran athlete go out there and grab gold, whether it’s for the first time or for the fifth. Check out the athletes we can’t wait to watch this summer. You’ll see names ya know…and some ya won’t. Study up and get ready to tune in.

Venus and Serena Williams have been big names on the U.S. women’s tennis scene for the last decade. While they’ve seen their ups and downs, they’re coming into the Olympics on a Wimbledon high.  Serena handily won her 14th grand slam title and her fifth at Wimbledon—same as big sis Venus. The siblings also competed doubles together for the first time since 2010…and won, natch. They’ll be playing both singles and doubles in London.

LeBron James led the Miami Heat to their second NBA championship ever this year. With numerous titles (and Olympic gold) under his belt, we’d say he’s definitely b-ball royalty.

Kim Rhode was the youngest member of the 1996 U.S. Olympic Team. Four medals later, she is also positioned to become the first American to win individual medals in five straight Olympic Games. Her sport of choice? Shooting. She has won two gold and one bronze in double trap, and a silver in skeet.  Fun fact: She’s been using the same shotgun in competition for 18 years.

Michael Phelps—Does the name sound familiar? It should! He holds the record for most gold medals won in a single Olympics, and this year, he’s trying to break gymnast Larissa Latynina’s record of total medals won by any athlete.  While teammate (and roommate!) Ryan Lochte proves fierce competition, we’re betting this Baltimore native will hold his own. Be on the lookout for his biggest fan—his mom!—and his signature move, arm swings on the block.

Kerri Walsh and Misty May-Treaner are back! After the dominant beach volleyball duo won their second gold medal in Beijing, Misty was pretty sure she’d seen her last Olympics. But Kerri felt otherwise—she knew the pair would be back, and after starting their own families, they are. Though they aren’t at the peak of their game (at their best, they won 112 tournaments in a row), the world will be watching as the pair hit the sand once again this summer.

Jonathan Horton. This year’s U.S. men’s gymnastics team is considered a serious contender for gold, which they haven’t won since 1984. And the backbone of the team is Olympic vet Jonathan Horton, who won a team bronze and an individual silver in the high bar in Beijing. What do we love most about him? He’s a total team player.

Steven Lopez, who could become the most decorated Taekwondo fighter of all time if he wins any medal at the Games (he’s already won two gold, one bronze and five world championships).

Allyson Felix has medaled twice in the 200-meter race, once in Athens and once in Beijing. She returns to London hoping to seize a gold medal. She will also run the 100-meter sprint. You might remember a bit of controversy about a month ago: During the final qualifying race at U.S. Olympic Trials, she tied for third with Jeneba Tarmoh. The pair was going to have a runoff to decide who would run the race in London, but Jeneba pulled out, giving Allyson her second bid to the London Games.