Toys by the truckload: Ashley helps kids in need 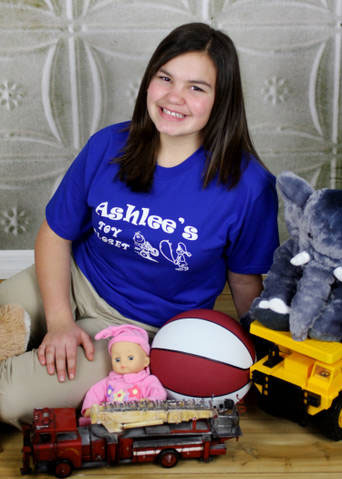 When you’re little, toys are a big deal.  Ashlee Smith, a 13-year-old from Reno, Nev., understands this – that’s why she started Ashlee’s Toy Closet, an organization that collects toys and donates them to kids who have been affected by natural disasters, house fires or tough economic times.

Ashlee knows from experience what it’s like to lose a favorite toy.  When she was just five years old, her family’s home burned down and she lost all of her possessions, including her fave stuffed animal.

When a large fire hit South Lake Tahoe, Calif., in 2007, she saw the devastation and wanted to help the kids affected.

“I basically knew how they felt because they didn’t have any toys and neither did I [after our house fire],” Ashlee explains.  She held a toy drive that was a huge success. She collected a semi-truck trailer full of toys for kids in need!

Since then, Ashlee’s Toy Closet has given out more than 175,000 toys.  More than that, Ashlee has seen how her service has a positive effect on the kids she helps.  She tells the story of how of her first drive. There was a little girl who was really shy and wouldn’t talk to anyone. Ashlee asked the little girl if she liked Strawberry Shortcake, because that’s what Ashlee liked when she was five.  The girl said yes, so Ashlee grabbed a $5 Target Strawberry Shortcake puzzle for her, not thinking it would be a big deal.  But it was.  The toy was actually the exact same as one she had lost, and had been one of her favorite. “She spoke to me for the rest of the day,” Ashlee says.

At 13, Ashlee’s already accomplished so much.  For the work she’s done with Ashlee’s Toy Closet, she was named a National Honoree at the Prudential Spirit of Community awards, a yearly program that recognizes middle level and high school students for outstanding community service.  Being recognized as a National Honoree makes her one of America’s Top 10 Youth Volunteers for 2012.  But Ashlee wants to keep going and do even more.  She hopes to take her organization nationwide, or even help kids in Africa.

No matter what, Ashlee knows that any act of kindness, big or small, counts.  “You don’t really have to make a huge impact to help somebody. Anybody can do it,” she says.

What’s her advice for other girls who wanna lend a hand?  Find a cause you’re passionate about.  She explains, “You just have to have a motive. You have to have a reason behind your organization of why you want to do it.”

Want to get involved?  Check out www.ashleestoycloset.com for more information on Ashlee’s Toy Closet and how to donate.

POSTED IN charity, do gooder