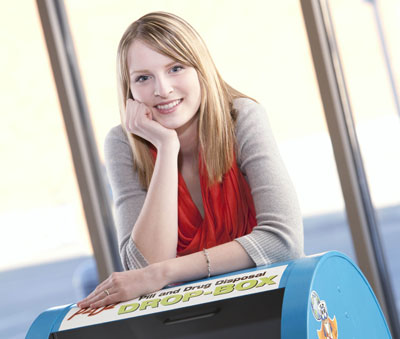 A local tragedy inspired Jordyn Schara, a 17-year-old from Wisconsin, to learn about proper medication disposal.

“When a teenage boy in my area died because he abused prescription drugs that his girlfriend had stolen from her grandmother’s medicine cabinet, I was so saddened. His life was thrown away because of a few pills,” she explains.  She learned that many people flush unwanted meds down the toilet, which has negative environmental effects and can be harmful to drinking water. “I decided to make it my personal mission to educate people on the proper way to dispose of medication and make it easy for them to do so.”

“I created WIP2D2, which stands for Wisconsin Prescription Pill and Drug Disposal, to focus on reducing the impact of unused or unwanted pharmaceuticals in the world while working to spread awareness about prescription drug abuse.”

The organization has held drug collection events, purchased 24/7 drug drop-off boxes and mentored teens and adults with their programs.  WIP2D2 has helped collect over 600,000 pounds of drugs that are now out of the hands of young children and teens, she says.

Jordyn has been recognized for the impact she’s made through WIP2D2.  She was named a National Honoree at the Prudential Spirit of Community awards, a yearly program that recognizes middle level and high school students for outstanding community service.  Being recognized as a National Honoree makes her one of America’s Top 10 Youth Volunteers for 2012.  She also served as a torchbearer in this year’s summer Olympics in London.  Amazing, right?

While Jordyn’s program is well underway now, her journey was tough in the beginning.  “When I first started my project, I was told ‘no’ on a daily basis, usually several times a day,” she says.  She contacted multiple governmental agencies, and none of them wanted to help with her project. “They all said that since I was a 14-year-old girl, there was no way that I could have a successful project.” But Jordyn knew her cause mattered, so she kept fighting.  “I kept my head up and pushed harder until someone told me ‘yes.’  From there, no one could stop me.”

Wanna make a big impact like Jordyn?  “Just dive right in.  Whether you want to help animals, underprivileged children, senior citizens, or the environment, you need to start small.  Volunteer at a humane shelter, plant a tree, raise money so girls in Africa can get an education. . . whatever you want, just do it!  Small things eventually lead to big things,” she says.

If you want to help your community with safe medication disposal, Jordyn suggest setting up a drug disposal site and educating your friends and family about the issue.