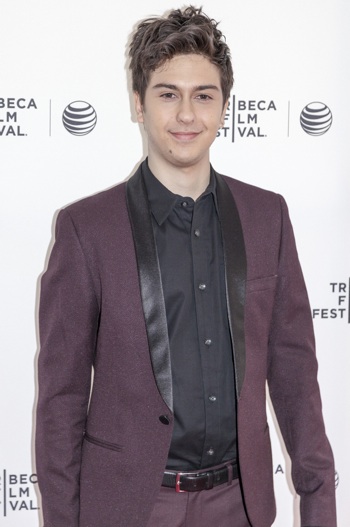 The Fault in Our Stars countdown has begun and everyone is anxiously awaiting its theatrical release on June 6. We hopped on the phone with one of the stars of the movie, Nat Wolff, and got a GL exclusive just for you!

In the movie, Nat plays Isaac who is a blind cancer patient and loyal BFF to Gus (Ansel Elgort) and Hazel (Shailene Woodley). We can’t wait to see him bring this character to life on the big screen and we know that he is quickly becoming everyone’s new celeb crush. From behind-the-scenes secrets to how he got into the role of a blind character, here are six surprising things we learned about Nat Wolff from chatting with him.

“I lived in apartment right next to Ansel [during filming] so we would spend all our time together, usually in his apartment because he is really clean.”

2. He was a trouble maker while filming

“The day before we started shooting, I got locked out of my room. I was [freaking out] because I had to get up early and film two big scenes, so I called Ansel. I kicked a hole in the door, he knocked it over, and we got it on video. We’re [like] broken door brothers!”

3. He doesn’t have his driver’s license

“I don’t drive because I grew up in New York City, so there wasn’t much I could do [while filming this movie] in Pittsburgh.”

5. He can find the hidden lesson to every situation

“In The Fault in Our Stars, there’s one line that [references] to be, ‘Loved deeply, but not widely.’ Everyone has this fascination with the more people that love you, the better person you are. But if you can truly give yourself to one person or few, like your family, close friends, girlfriend, boyfriend, whatever, that’s more important.”

6. He hung out with an actual blind cancer patient while on set

“We all really did meet with real cancer patients and I met with a real guy who went blind at the same age as my character and had the same medical issues. He taught me a lot of things technically and emotionally about being blind. He’s a very functioning person, like he gets to work by himself, so I tried my best to be like this guy and be as independent as possible.”

Don’t forget to check out Nat, and the rest of the cast, in The Fault in Our Stars when it hits theatres June 6.

Sneak a peek at the film below…

Want more from Nat? Be sure to check out Girls’ Life’s June/July 2014 issue—on sale now!

Are you pumped for TFiOS? Heart Nat Wolff? Share in the comments below.

POSTED IN entertainment, movies, The Fault in Our Stars, celebrity interviews, Celebs, Shailene Woodley, In the mag, June/July 2014