What should I do about my crush's jealous GF? 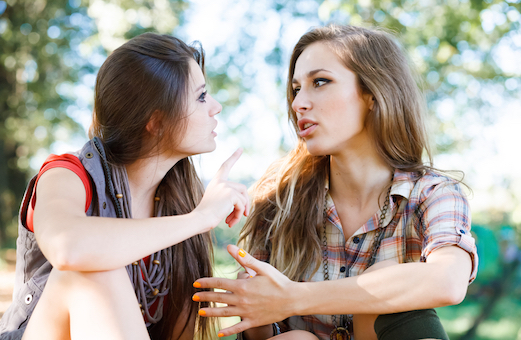 I have a crush on this guy, but he's already going out with someone. He talks to me a lot, and she's getting really mad at me. Shouldn't she be mad at him? Do you think he likes me? If so, what should I do?

BILL: Let me answer your questions in reverse order.

Question #3: You probably shouldn't do anything differently than you're doing now, assuming you're just being friendly and not competitive. You can't control people's feelings. You can only be yourself.

Question #2: He definitely likes you, unless he's playing a little game, trying to make his girlfriend jealous maybe? But that would be a lot for most guys to keep straight in their minds (we're a fairly simple lot, remember). So he probably likes you. A lot.

Question #1: His girlfriend probably ought to be mad at him, but since anger and jealousy are wasted emotions, she should just send the guy on his way and let him flirt on his time instead of hers. She's mad at you because she's not all that confident in herself, which could be why the guy's eye is wandering.

DAVE: I advise going low-key on this one. Don't pursue the guy—just let the cards fall where they will. If you're the one for him, he'll make certain it happens. Sure, she shouldn't be mad at you. But she doesn't want to be mad at the guy she digs so you are the easiest alternate target. So make the bull's eye on your back as small as possible. Does he like you or just dislike her? That remains to be seen.

POSTED IN advice from Bill and Dave