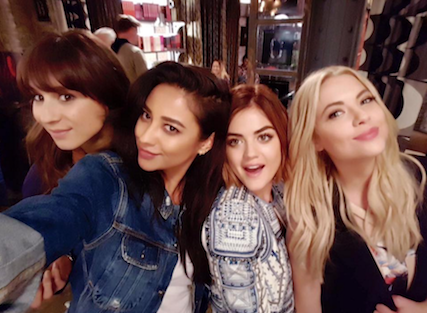 When Pretty Little Liars finally revealed A's identity, we were still left with plenty of questions. Though we'll have to wait until January for the next season, tonight we'll get the chance to see the exciting #5YearsForward special.

In the show, we'll get a sneak peek into the future, and according to the cast it's life or death. Emily, Hannah, Aria and Spencer have all moved out of Rosewood and begun new lives, but when Allison needs their help they're forced to return home. Showrunner I. Marlene King promises that the new episodes will be even darker and more twisted than ever, and that all of the life-threatening situations will have you on the edge of your seat.

Tune in tonight to watch Marlene, Ashley Benson, Shay Mitchell, Lucy Hale and Troian Bellisario dish on the new season and reveal some never-before-seen footage. Check out one sneak peek below, and watch the rest of them on the Pretty Little Liars Facebook page.

Will you be watching tonight's special? Tune in to ABC Family at 8:00 p.m. tonight (November 24) to watch.