It’s finally official! The wild card picks performed for the last time and I sat on the edge of my seat awaiting the final results. This season is full of talent and variety, which is why I’m super happy that I am not one of the judges right now—they have a tough decision to make!


Jesse Langseth began the wildcard performances singing “Tell Me Something Good.” I totally love her jazzy vibe, but her performance didn’t have that wow-factor. The judges dig her swagger and soulful vocals, but they didn’t seem to be overly impressed by the performance either. B+

Matt Giraud went second singing “Who’s Loving You” by the Jackson 5. His raspy voice took my breath away (not to mention the fact that he’s not so bad on the eyes either). He made the song his own and the judges totally loved him too! Go Matt! A

Megan Corkrey took over the mic singing “Black Horse and the Cherry Tree.” Her style and vocals are definitely one of a kind and the judges think her song choice was absolutely perf! I agree with them, although I think she may need to work on her corky dance moves a bit more. A-

Von Smith went fourth singing “Sorry Seems to be the Hardest Word.” Von’s vocals started out a bit pitchy, but he def hit the higher notes without a problem. While I think he has a lot of potential, the song was not my cup of tea nor was it the judges who thought this pick was way too serious for Smith’s upbeat personality. B+

Jasmine Murray stole the stage with Christina Aguilera’s “Reflection.” Jasmine has definitely become one of my faves! Each note was on key and her voice sounded super strong. It was a huge turn around from her previous performance and the judges were pleasantly surprised by her powerful vocals. A 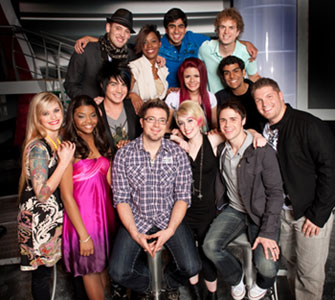 Ricky Braddy went next singing “Superstitious”. His bubbly personality and energetic performance made it hard not to get up from my couch and start dancing (which I totally did by the second verse). The judges agreed that he loosened up and it def served to his advantage! B+

Tatiana Del Toro hit the stage with Whitney Houston’s “Saving All My Love for You.” Like Tatiana, I am a huge fan of the song and thought she sounded awesome! A drama queen she may be, but I can’t get enough of her many personalities and emotional breakdowns. The judges took a liking to her powerful voice, but couldn’t help but wonder why she picked to sing a song she had already sung. A-

Anoop Desai performed last singing “My Prerogative.” He totally sang the song with that Anoop-attitude that is oh-so loveable. He was upbeat and whipped out some crazy dance moves that Paula took a liking to. Overall the performance was tons of fun! Great job, Anoop-dawg! A

The top idols were selected and their hard work has for sure paid off! After the judges announced their picks for the top 3…wait, scratch that top 4!  Not only is this season full of talent, but it’s full of surprises as well!  Simon announced that the judges had selected an extra idol to add to the bunch. The idols joining the top 9 are Jasmine Murray, Megan Corkrey, Matt Giraud and Anoop Desai. Wow, the idea of having an additional idol sent chills through my body (okay, so maybe I’m a little more dramatic than Tatiana, but that’s what you get for being such a huge AI fan).


What did you AI fans think of the final picks? Were you totally shocked by the surprise ending? Tell us your thoughts!