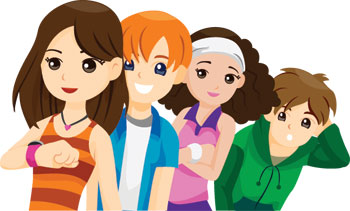 I really like this guy. But, the downside is that I am way too shy to ask him out and he is the same way. I don't have his phone number, email or anything!
We kinda know each other, but not that much but I constantly catch him staring at me in class. And when he laughs, he glances over at me. I want to figure out a way to ask him out or something, but I know people will judge me because not a lot of people like like him, and I am bullied.

And plus, he is always hanging out with a guy that really hates me, for no reason! He tried to trip me once and he makes fun of me when I am hyper, but I don't do anything weird, I just talk a lot. Help!


Boy, oh boy, aren't boys sooo confusing? I totally know how you feel, hon. I was that shy girl in middle school, too. And it definitely doesn't help when the boy you're crushin' on is shy, too. Here's what you should do...


First, you gotta get this shy sweetie to open up a li'l. What's an easy, no-fail way to approach a shy guy? Ask him about something you have in common. This way there'll be no pressure and it's the perfect opener for shy girls like you and me. In the same science class? Use that as your opener. Before class, walk up to him and ask him about the homework assignment. You could say,"Hey, what did you think about last night's homework?" If he says it was tough and you thought it was too, tell him so! Get him talking on a comfy topic.


And as for his other friend? Don't worry about what other people think, chica. In this case, you like this guy, and it's about him and YOU not him, you and his pals. But be wary of his friends. Ever hear of the saying, "birds of a feather flock together?" I'm not saying your crush is a jerk, but if his friend is mean for no reason, there's a chance your crush may have a bad side, too. So crush with caution!


But the only way to get the scoop is to strike up a convo with your cutie and see what he's really like. And next time his bud is nasty to you either ignore him or straight up ask him, "Don't you have anything else better to do?" He'll feel sooo stupid and hopefully leave you alone. Lastly, I talk a lot (and really fast) when I get excited about something, too; so no, you're not weird! In fact, you're a great, smart chica. Go get get that guy!