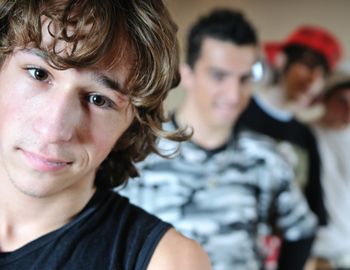 I recently started going out with a guy friend, but I think he is embarrassed about it. He refuses to tell anyone we’re going out now. I don’t know what to think. Help!


BILL: Guys often run in packs, like dogs. Or Musketeers. So if one guy in the pack pairs off with a girl, no matter how great that girl is, it affects the dynamic of his pack. After all, your guy will be spending some time with you instead of his pals. Measure your guy’s devotion in the time spent with you, not by what he says (or doesn’t say). Besides, who wants to be the one to take the blame for reducing the Three Musketeers to Two?


DAVE: Bill’s right on about the pack-mentality of males, so look at the bright side. While you might view your BF’s silence as a negative because it appears he’s less-than-proud to be dating, it beats a kiss-and-tell braggart. If your boyfriend wants to keep the relationship between you and him, without any outside interference for now, let it be.