The Secret Scoop: The Secret Life of the American Teenager 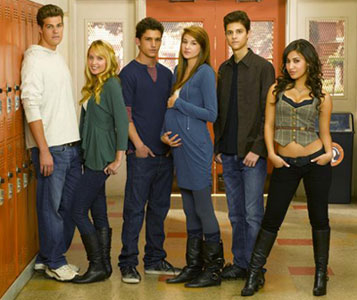 GL's June/July ’09 cover girl Shailene Woodley—who plays Amy Juergens on the ABC Family hit The Secret Life of the American Teenager—gives us a heads up on what’s in store for the new second season. Here’s what she has to say!


What can fans expect from season two?
“Of course, a lot of drama. Amy has to deal with her baby. She’s going to miss out on a lot of social events and school things. She has to handle a job, plus taking care of the her child, getting no sleep, having to go to school and deal with her boyfriend and friends.”

What’s it like working with real babies?
“It’s amazing. I love babies and kids, so being able to hold the little schnookums is so cute.”

Can you share a scoop or two?
“One person doesn’t come back. Another passes away.”

Whom from the cast do you hang out with a lot off set?
“Megan Park is a really good friend of mine. We just get along really well, and she’s teaching me guitar. And Molly Ringwald is like an older sister to me.”

Who is the most like their character?
“Probably Kenny [Baumann] and Ben. I imagine Kenny was a lot like Ben when Kenny was in high school, since he’s kind of goofy and one of the smartest guys I’ve ever met. India [Eisley] and Ashley are similar, too, because they both have that funny, sarcastic tone.”

Who’s least like their character?
“Probably Megan and Grace. And Amy and me.”

OK, spill: What’s it like working with the two hot guys?
“It’s really fun to work with both of them. The scenes are very different because Amy is more flirtatious with Ricky than Ben. Daren [Kagasoff] and I like to go back and forth about it. And then Kenny and I are more serious about it.”

What do you guys do to kill time between takes? Any funny behind-the-scenes stories you can share?
“We do stupid little skits. We’ll get a video recorder, play Britney Spears, and pretend to be her. Everyone gets all crazy—it’s pretty funny when the guys do it!”

Check out the premiere of The Secret Life of the American Teenager on ABC Family June 22.