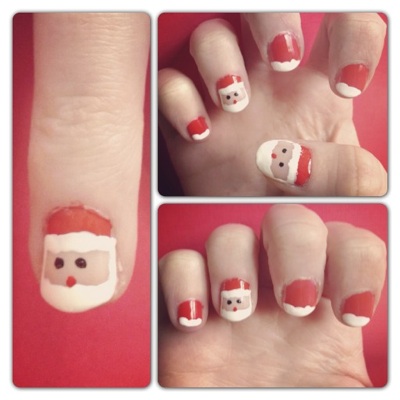 On the fourth day of Christmas, Girls' Life gave to me…a Santa mani.

Ho Ho Ho-liday manis featuring ol' Saint Nick, Kris Kringle, Santa Claus, or Papai Noel. Whatever you may call him, he's holly, he's jolly, and he can now be featured on your mani!

·    Hair dryer (optional, used at a low setting to speed up the drying process)

2.    Using a toothpick, paint a red stripe over your nail by the cuticle. Let dry.

3.    Take another toothpick and dab on Santa's hair and beard using white nail polish. Make the beard slightly thicker than the rest of his hair. Let dry.

4.    Using black nail polish, dab on two eyes with the tip of a toothpick.

5.    Finish off his face with a red button nose created using red nail polish and the tip of a toothpick.

For the other nails:

2.    Using a toothpick and white nail polish, dab on a line on the tip of your nails. Babes, don't worry about the line being straight. The goal is to make it look fluffy like Santa's beard!