What is *really* under your nails? 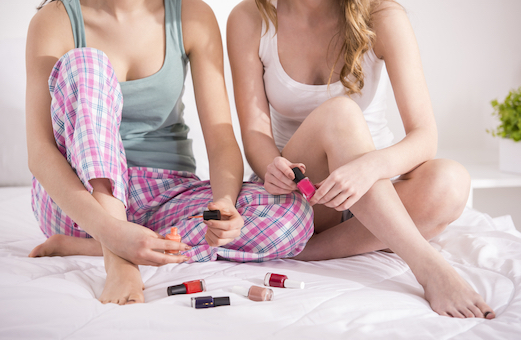 Ever feel like no matter how many times you scrub under your nails, not all of the dirt and whatever-else gets removed? We feel you—and we're here to help.

Though it may seems more sinister, the stuff that appears under your nails is a just a combination of dirt, lint and other personal care items like lotion or hair products. Oh yeah, and the underside of the nail produces its own debris...and collects some of the bacteria that gets on your nail beds. Sounds gross, but it really isn't. While the gunk can be super annoying to deal with, it's actually pretty harmless.

So what's the solution? One of the easiest ways to effectively keep your nails clean is the "scratching" method, which can be done in the shower or during normal handwashing. Start by putting some soap (preferably bar soap) on your right palm and using your left hand to brush the bottoms of your nails overtop of the soap—thus, “scratching." Nail brushes can also be effective, but make sure you're keeping them clean and not actually distributing more bacteria under your nails.

While it might be tempting to clean your nails with a pencil or other pointy tool, *don't.* You can cause irritation of accidentally push bacteria into places where it doesn't belong, thus causing infection—which is way worse than a dirty nailbed.

Long story short? That dirt is normal, but that doesn't mean you have to deal with it. Keeping it clean is easy—and washing your hands regularly just happens to be an awesome habit.

How do you keep your nails clean? What's another weird recurring body prob you deal with? Let us know below!

POSTED IN Beauty, how to, tips, nails, nail safety