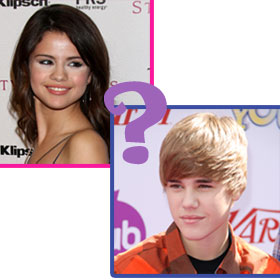 We were puzzled when Joe Jonas and Ashley Greene started canoodling, but it seems like the two are (yikes!) still going strong. Yea, we’re not too sure if these most recent bizarre Hollywood match-ups will make it well into 2011, though.

Think these star-powered pairs are REALLY dating, or are they just eying a li’l extra company for the holidays? YOU be the judge.

They’ve been spotted snacking on fro-yo and most recently munching on pancakes at a recent IHOP—apparently holding hands and acting a tad more chummy than you would with a guy who Sel claims is just her friend. Two years Selena’s junior, we tend to think the Biebs is a bit more rough around the edges than her past wholesome ex, Nick Jonas.

A whirlwind romance, the pair have been spotted everywhere from Nashville and New York to the UK. Aside from the eight-year age gap, we can’t help but wonder if a more mature dude is right for Tay…or if this one will end in a tear-jerking love song like the rest. Sigh.

From shooting hoops to shopping trips, the duo have been chummy since the end of summer. Sure, this slashes rumors Gleeks only date eachother. We’re hoping even more this cute couple (who are starring together in the flick I Am Number Four this February) make it last well beyond their movie’s running.

Think they broke up BECAUSE of the holidays?

Ah, yes, then there are the couples who’ve dated for what seems like an eternity and got dumped just before Christmas and New Years. Vanessa and Zac we’re looking at you.