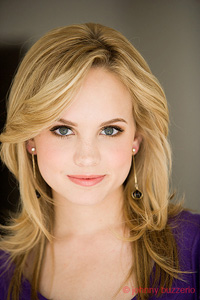 Mean Girls 2 is premiering on ABC Family tonight at 8 p.m. ET/PT. Will you be watching?

Though the flick has no direct ties to the prized original cast (well, except for Tim Meadows returning as Principal Duvall) we’re eager to see what it’s all about. In this latest version, new-to-school Jo (played by Meaghan Jette Martin) hits up North Shore High hoping to avoid the typical teen drama. But that all backfires when she quickly befriends Abby (played by Jennifer Stone), “The Plastics” favorite target.

GL: What’s your favorite thing about Jo?
Meaghan: She’s a lot different than characters I’m known for playing like Tess in Camp Rock or Bianca in 10 Things I Hate About You. Both of them kind of want to be popular and go along with the crowd, and Jo isn’t any of that. She’s strong, independent and is not going to let anybody change who she is.

Any similarities between you and Jo?

I think our biggest difference is probably the fact that she is more of a tomboy than I am. I’m more on the girly-girl side, but we have a lot in the fact that we’re both stubborn and strong-willed. That can be good AND bad. 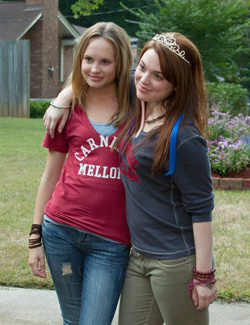 If you were to be given a school superlative in the yearbook right now, which would it be?
Class clown or teacher’s pet. Probably teacher’s pet. I guess in my mind, I wanted to be the class clown, but I was actually the suck up.

Have you had to deal with any mean girls in real life?
Luckily, I didn’t really have to deal with mean girls so much in school, but obviously in all of life, there will be mean girls, mean guys, mean people in general. I definitely had the girl drama moments.

PS: Happy early birthday! Spill it: Would you rather have pie or cake at your bash?
I love cake! Plus, you can have more fun decorating it. Marble cake is my top favorite.

If you could make one birthday wish right now, what would it be?
Hmmm, could I wish for more wishes?

Ha! Be sure to check out Meaghan in Mean Girls 2 tonight on ABC Family. Love the flick? It lands on DVD Feb. 1. Sweet! Be sure to turn to page 44 of our February/March 2011 issue—out now—for 10 more fun facts about this talented starlet.

Have you ever had to deal with a mean girl in school? Blog about it, babes.