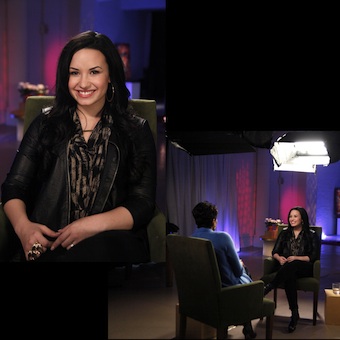 It’s no secret this past fall and winter were rough for actress/singer Demi Lovato. Before the end of her tour with the Jonas Brothers, she had checked herself into rehab for, what reports are claiming, emotional and physical issues. Almost six months later, Demi’s ready to tell her story.


Word is the Camp Rock 2 star recently opened up to reporter Robin Robert and part of the interview will be aired on ABC’s Good Morning America at 7 a.m. next Friday, April 22. Interested in seeing  the entire interview? Set your TiVos for 10 p.m. that same evening when the full thing will be featured on 20/20. Demi will apparently open up about the eating disorders, cutting problems and depression she has been trying to fight long before she became a star.

Intrigued yet? We know we are! This will be Demi’s first televised interview since leaving rehab and we have no doubt it will shed some new light on this chica. Based on tweets, and the video message she sent out to fans on Cambio last month, it seems like this Disney gal has a whole new look on life. You go, girl!

Will you be tuning in to watch Demi share her story? Blog about it, babes.