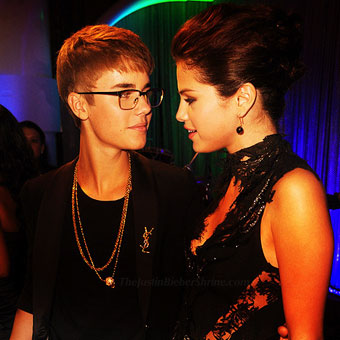 
Is it just us or have Justin and Selena been all over the news lately?

Selena gave fans quite a shock performing in Las Vegas a little more than two weeks ago when she appeared to have her BF’s name inked onto her right wrist with a drawing of a heart underneath. We’re still wondering if it’s a real tattoo or just magic marker!

The Biebs also shared some pics he snapped with Selena on his Instagram account. There’s one of Jelena holding 6 babies with the caption “Brangelina 2.0” underneath. That one has us a smidge worried!

And just this weekend, Justin surprised Selena with the most romantic gesture we’ve heard of. After attending BFF Demi Lovato’s concert at the Nokia Theater, the Biebs took Selena underground to the neighboring Staples Center—which he rented out just for her! When the couple walked inside, they were treated to a private screening of Titanic. Do you think renting out the Staples Center comes with free popcorn? Hope you saved some for us!


We wanna know: Are you all shocked that Justin is such a romantic at heart? Or do you think that all of this Jelena hype is getting a bit ridiculous? Blog about it, babes!
Love this post? You'll heart these, too!
» The stars of Degrassi share their BTS style