5 excuses to crush on Josh Hutcherson 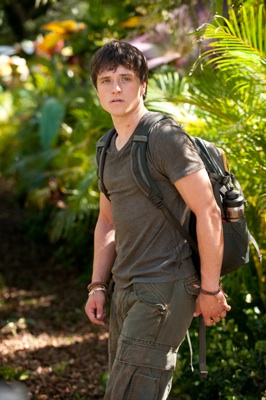 You can bet that this sequel to 2008’s Journey to the Center of the Earth has more action, more heart and, most importantly, more of cutie Josh Hutcherson.

We caught up with the 19-year-old and had him dish on some behind-the-scenes secrets, co-star (Vanessa Hudgens!) surprises, and his real-life adventure. As if you weren’t already swooning for this sweetie, here are five more reasons to crush on him right now.

He’s got a sense of humor. “We were filming in the jungle so Vanessa and I would always find like really long branches or twigs and stuff like that. We’d stand far behind somebody and sort of put it in their ear so they would think it was a bug crawling in their brain. It was fun to watch them freak out.”

He can stay friends with an ex. Josh and Vanessa may have been a couple when filming the flick, but we all know she’s now cozying up to Hollywood hottie Austin Butler. No worries, though! Josh still has nothing but nice things to say about his former flame. “One thing that really took me by surprise about Vanessa was how personable she was. Somebody like herself who’s constantly in the public eye can tend to be a little reserved when it comes to making friends. But she was really open. We’re very similar and always up for a good adventure.”

He hearts his mom. "I love my mom to death. Of all the moms in the world, she’s definitely the coolest.”

He’s outdoorsy. “When I was filming The Hunger Games in Asheville, North Carolina, my dad and I went on like a two–day hike up into the mountains with these giant backpacks and pitched our own tent. We got on the wrong trail and kind of got lost at one point [though]. It was a little scary.”

He's a romantic at heart. “I definitely get a little sappy with that kind of stuff. I’m very much the random bringing-flowers-to-a-girl kind of guy.”

Snag a peek at Josh in Journey 2: The Mysterious Island (in theaters now!) below…

Will you be checking out Journey 2 this weekend? Blog about it, babes.

by Rachael Ellenbogen and Patricia McNamara | 2/1/2016