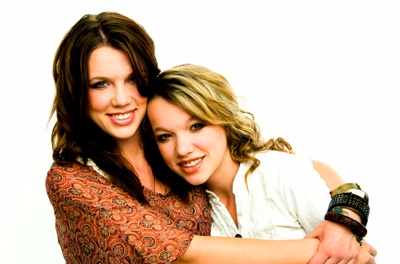 These girls got their jumpstart in the music world when they competed on America’s Got Talent in 2010—and made it to the top 10. They had auditioned separately for the show, but later on, the judges told them that they would be awesome as a duo!

Ali and Christina Christensen have been busy writing and recording their EP “Love Is Gonna Find You” (which can be found here!). But what’s even cooler is they’ve decided to exclusively release the music video for their song “The Same Way” to GL.

It’s no secret the issue of bullying is everywhere right now. Lady Gaga just kicked off her anti-bullying Born This Way Foundation. The Weinstein Company is releasing their Bully movie in theaters this week. And Ali & Christina are taking a stand against bullying as well, tackling it in “The Same Way”.

We caught up with the girls and had them share the scoop about their new music video, as well as their rise to the top. Check it out.

GL: Growing up, both of you were diagnosed with cystic fibrosis. Doctors told you you’d never sing. What’s that been like for you?

Christina: We've lived with cystic fibrosis our whole lives, so we’ve never known [anything] different. It was never in the cards for us to be able to sing, run a marathon, or be outstanding athletes, but we didn't let that stop us. Singing is our passion and it actually helps keep our lungs strong and healthy.

Any advice for girls out there about not letting anything get in the way of their own dreams?

Ali: If you have a passion, don't let anyone stop you. You need to believe in yourself and your dream and go for it no matter what obstacles may get in your way. You can do anything you set your mind to.

Tell us a little bit about “The Same Way”—What does the song and music video mean to you?

Ali: "The Same Way" is an anthem against bullying. The thing we love most about this song and video is that it has such an amazing message. Bullying is a huge issue and it needs to be stopped. We hope this song and music video will touch the hearts of others.

Have you ever had to deal with a bully?

Christina: When Ali and I first appeared on America's Got Talent, I had a really jealous friend. She went from my best friend, to someone who would post nasty things about me on her blog and give me the cold shoulder at school. It was really hard to deal with.

What’s the biggest piece of advice you could give to girls out there who are currently being bullied?

Christina: You are special. Don’t dwell on what other people think of you, but rather focus on the great things about yourself. Don't retaliate and never stoop to the bully's level. But if it gets to a point where it's unbearable, contact a teacher or parent. You don't have to suffer through it alone.

What about the biggest piece of advice you could give girls out there who might be doing the bullying?

Ali: To the girls who are doing the bullying, step back and figure out what in your life is causing you to act this way. Instead of looking for things to bully people about, think of things that you could say and do for people that would enlighten their lives. You don't need to be a bully. Make a legacy for yourself. Have people remember you as a kind person rather than someone who tears people down. It's never too late to change.

Watch Ali and Christina’s music video for “The Same Way” below…
Did you watch these girls on America’s Got Talent? Are you glad they’re speaking out against bullying with their new song? Blog about it, babes.
Photo Credit: aliandchristina.com
Love this post? You'll heart these, too!

POSTED IN entertainment, television, music, celebrity interviews, watch this, bullying 101, how to deal with a bully, I'm a bully