Get the first look at Let It Shine 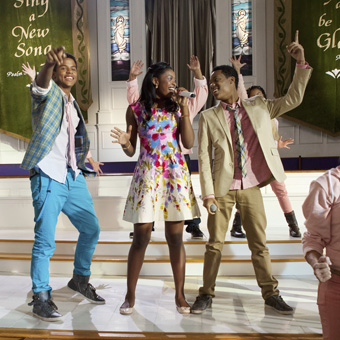 Finally, a bright light has been turned on and our eyes can see! Good, let the light shine because now we can watch the first look of the brand spankin’ new Disney Channel Original Movie (coming June 15!), Let It Shine, starring Coco Jones.

You probably know this girl as the amazingly talented Radio Disney “Next Big Thing.” And after watching this peek at Let It Shine, it is obvious Coco will really be the “next big thing!” She plays a teenage superstar singer, which definitely isn’t much of a stretch from her real life. Her character, Roxie, is putting on a songwriting contest. A shy, sweet boy named Cyrus (played by Tyler James Williams) writes an amazing song about her…and wins! The problem? The judges think the song belongs to his bestie Kris (played by Trevor Jackson).

Will Cyrus be able to overcome his shyness to tell the world that he wrote the song? Will he be able to get the girl before Kris steals her away? Yeah, we want to know, too!

Check out the first look of Let It Shine below…

Definitely make sure to check out what happens when Let It Shine airs on Disney Channel June 15 at 8 p.m. ET/PT!

Are you excited about this new DCOM and all the music in it? Did you follow Coco in Radio Disney’s N.B.T. and vote for her? Blog about it, babes.

POSTED IN Disney, Next Big Thing, watch this