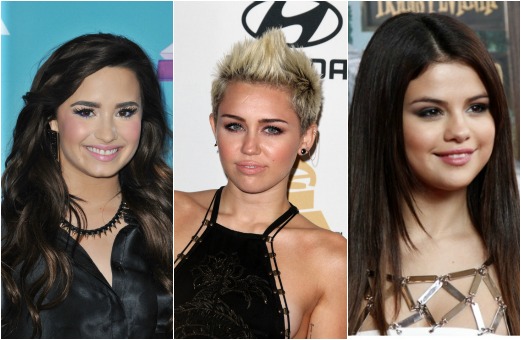 From the MTV Movie Awards to Miley’s MIA ring, there have been a lot of celeb shockers this week.  We’ve rounded up some of the hottest gossip swirling around out there to keep you in the know. Check it out!

With all these cheating and wedding-canceling rumors, we’re super worried because Miley Cyrus was spotted without her engagement ring. Reports came forward this week, claiming Miley and Liam have hit a “rough patch” in their relationship, mainly due to stress from Miley working on her new album. But then the starlet Tweeted, “I didn’t call off my wedding. Taking a break from social media”…but that was before she was spotted around town sans bling. So what’s up, Miles?

Go, Gomez! We’re psyched to see this adorbs fashionista living her single life to the fullest. In fact, sources say the young beauty is moving on to bigger, better, older things: “Selena is looking to date an older man this time,” claims the insider, who went on to say that Selena’s embarrassed by the Biebs since the breakup. Uh, oh! We hope these two can play nice and Sel can continue to focus on herself for a while.

Surprise! Demi has (another) sister

Demi Lovato recently announced that she discovered and met her long-lost half-sister for the first time last summer. The 20-year-old singer revealed, “She’s in her 30s. She’s my half sister…So I actually have three sisters!” So cool. Any chance we’re half-sisters, too…kidding.

One Direction superstar slips up

Just because you’re a pro, doesn’t mean you're perfect. During a recent One Direction in the UK, singer Louis Tomlinson blanked on the lyrics to a cover of “Teenage Dirtbag,” a 2000 Wheatus hit. But the cutie laughed off his “oops” moment, admitting mid-song “OK, I just forgot the lyrics. I'm not even going to pretend I know them.” Good for you, Lou!

This year was packed with awesome movies and fab performances. When MTV announced their nominations for the 2013 MTV Movie Awards early this week, we were so excited to spot some of our faves on the list.  Emma Watson and Rebel Wilson both scored nominations for “Best Female Performance” for Perks of Being a Wallflower and Pitch Perfect. Taylor Lautner, naturally, got nominated for “Best Shirtless Performance.” Our fave nominee for “Best Breakthrough Performance” goes to Ezra Miller, also from Perks of Being a Wallflower. Oh, and for “Best Musical Moment,” we’re rooting for Anne Hathaway for her Les Mis performance.  Catch the MTV Movie Awards on April 14 at 9 p.m. ET.

After socialite-model Kylie Jenner was spotted grabbing sushi with singer-actor Jaden Smith in London last Saturday night, rumors have been flying. So is this fling friendly, or is it something more? A close observer at a March 4 Justin Bieber concert claims, “From what I saw, it was clear to me that they are dating.” Fingers crossed! This starlet couple is totally adorbs.