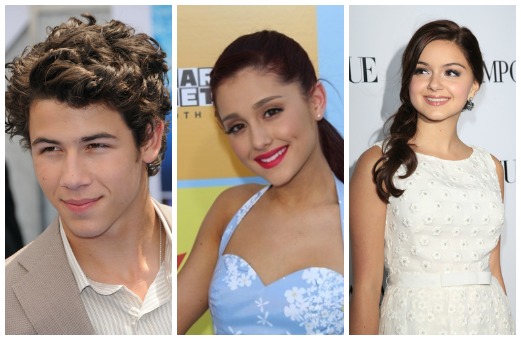 An old power couple rekindling their romance? New tunes from some of our fave stars? Hollwyood was buzzing this week with loads of juicy info…and we’ve rounded up the biggest moments below.
Miley and Nick together again!

Could it really be? Maybe Miles took a listen to Nick’s “Wedding Bells” and decided to give their love a try—one last time. The two were spotted doing lunch together at Paty’s Restaurant in Cali this week. Though an eyewitness claims it was less a lovey-dovey encounter and more a business meeting. Think the two will join forces for a duet on Miley’s upcoming album? Hey, if they can’t end up together, we’d at least  like to see some musical magic between the pair.

T-Swift back together with an ex?

Might have to do some tweaking to her hit “We Are Never Ever Getting Back Together” if that’s true. According to reports, the country singer has been suffering from a case of the lonelies since breaking up with 1D hottie Harry Styles. But apparently ex Conor Kennedy has stepped in as the shoulder for Tay to cry on. Think these two are back together…or are they maybe focusing on a solid friendship this go around? Guess time will tell.

Squee! You read that right. ABC Family dropped the bomb this week via their major social media accounts that they’ve picked up the hit show for a fifth, yes fifth, season. We are just dying to see what the “A” Team has in store for us now.

Oh, but that’s not all. The network also announced a Pretty Little Liars spin-off titled Ravenswood. The show, set to premiere this October after PLL’s annual Halloween spooktacular special, will center on a town, not far from Rosewood, PA (the home base of PLL), which has suffered under a deadly curse for generations. Five strangers suddenly find themselves connected by this fatal curse and need to dig into the town’s mysterious and terrible history before it’s too late.

Check out the teaser for the new series below. Who’s gonna be in the show? Are we gonna dig it as much as PLL? ABC Fam, we want some answers!

Mark your calendars! Selena Gomez announced this week that she’s gonna release new tunes (finally!). Her single, “Come & Get It,” will hit iTunes April 8, followed by a full-length album release this summer. You might as well start memorizing that tune, too, because Sel also announced she’ll be performing “Come & Get It” for the first time live on TV during the MTV Movie Awards April 14. We cannot wait to see her rock that stage.

Want another reason to watch the MTV Movie Awards? Hermione’s gonna be honored! MTV announced this week that this year’s Trailblazer Award, which honors young actors who are actively carving out their own unique and diverse path in the film industry, is going to Emma Watson—who is nominated for three additional awards this year. We’re proud of ya, Em. Wonder what you’re gonna say in your acceptance speech—and who’s gonna hand that trophy over to ya.

No, seriously. And to prove it, she slapped a ton in her new music vid a la Selena Gomez’s “Hit The Lights”. The 19-year-old singer dropped her latest vid for her single “The Way” this week, featuring Mac Miller—and it shot to No. 1 on iTunes in just hours.

Check out the fun below (as long as you, too, aren’t scared silly of balloons)…

Is red the new Hollywood blonde? Some might think so! We already adore stars like Ariana Grande and Debby Ryan’s firey locks, but one other teen has jumped on the bandwagon. Modern Family star, Ariel Winter, tweeted her new Ariel (the mermaid)-inspired ’do this week and we’re kinda digging it. Who’s the next celeb you think should go red? Sound off in the comments below.
Which story was the most OMG-worthy to you this week and why? Blog about it, babes.

+ Get pumped for prom with party tunes

+ Ariana or Emily? Which PLL character are you?