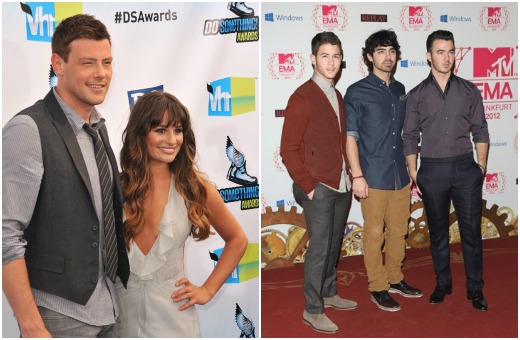 This week was a little cray-cray in Hollywood land. Read on for the scoop on a supportive GF, the return of a bro band, major movie announcements, sweet tweets and a 1D star who is all smiles.

Looks like Cory Monteith, who plays Finn on the hit FOX show Glee, will be absent from the season’s last two episodes after reportedly entering rehab for substance abuse this week. Viewers and writers alike will have to get ready for some new plot twists that don't rely on the presence of one of our fave William McKinley alumni. Lea Michele, Cory's on-and off-screen GF, has voiced her support for the star saying,“I love and support Cory and will stand by him through this.” It's sure nice to know that the Gleeks are stickin' together. We hope you get better soon, Cory.


The JoBros are officially back

After a four-year musical hiatus, the JoBros are finally back! The trio released their brand new music vid this week for their first single off of their fifth album, which hits stores later this year. The song, titled "Pom Poms," is uber catchy and the vid was shot in New Orleans this past February. Keep an eye out for Nick's dance-battle attempts near the middle of the vid.

Check it out all the fun below…

Funnier than a clown fish

Remember Finding Nemo and how it was the greatest thing ever?  Well, get excited because Disney announced Tuesday that a sequel is in the works and it's gonna be titled Finding Dory. With Ellen DeGeneres returning to voice the friendly blue fish that always reminds us to "just keep swimming," we know this film is gonna make quite a splash. Too bad we’ll have to wait until 2015.

We found out this week that next Sunday at the MTV Movie Awards, we’ll finally get to see the preview for Catching Fire, the much-anticipated film sequel to The Hunger Games trilogy. In the meantime, MTV has released a 7-second teaser that gives us a quick glimpse of the lovely Oscar-winning JLaw. We can't wait for the official trailer and the movie where she and hottie co-stars Liam Hemsworth and Josh Hutcherson will be sure to send off sparks. Watch the teaser here.


From Disney to Dancing

Demi Lovato showed off her fierce talent on Dancing With the Stars this week, giving the crowd a live performance of her latest hit single “Heart Attack.” Disney darling Zendaya (who is a contestant on the show) was "honored" to have finally met the pop princess. See the super cute pic Z snapped of the two here. So presh. Demi also announced this week she’ll be dropping her fourth studio album May 14. We can’t wait to check it out.

Get ready to flash us a toothy grin, 1D fans, because Niall Horan got his braces off! On Wednesday Niall tweeted a "before and after" pic of his teeth. It's nice to know that even Brit boy band cuties get the metal hardware, too. Lookin' good, Niall!

Which celeb OMG moment did you dig the most this week? Which shocked you? Share in the comments below.
Love this post? You’ll heart these too…
+ OMG, she did what?! Catch up on the latest Hollywood gossip
+ 6 books you should give a second chance
WIN BIG! Land a $430 eco-friendly prize pack from 31bits.com
MAJOR PLUS! GL is now on Google+